Muller on Book TV this Saturday 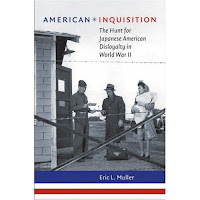 About the Program
Eric Muller examines the U.S. government's decision to force 70,000 American citizens of Japanese ancestry into internment camps during World War II. Mr. Muller chronicles the government's process of determining the loyalty of these citizens and the legal challenge it faced at the end of the war. Mr. Muller presents his book at the Japanese American National Museum in Los Angeles.

About the Author
Eric Muller is a law professor at the University of North Carolina at Chapel Hill. He is the author of "Free to Die for Their Country: The Story of Japanese American Draft Resisters in World War II."
Posted by Mary L. Dudziak at 10:40 PM