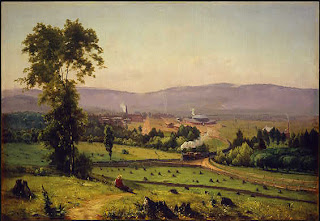 aw. Al previously blogged about this topic, with beautiful images, here. (The image posted is borrowed from his post.) Here's the SSRN abstract:
Landscape art in the antebellum era (the period before the American Civil War, 1861-1865), often depicts the role of humans on the landscape. Humans appear as hunters, settlers, and travelers and human structures appear as well, from rude paths, cabins, mills, bridges, and canals to railroads and telegraph wires. Those images parallel cases, treatises, orations, essays, and fictional literature that discuss property's role in fostering economic and moral development. The images also parallel developments in property doctrine, particularly related to adverse possession, mistaken improvers, nuisance, and eminent domain.
Some of the conflicts in property rights that gripped antebellum thought also appear in paintings, including ambivalence about progress, concern over development of land, and fear of the excesses of commerce. The concerns about wealth, as well as the concerns about the lack of control through law, appear at various points. Other paintings celebrate intellectual, moral, technological, and economic progress. The paintings thus remind us of how antebellum Americans understood property, as they struggled with the changes in the role of property from protection of individual autonomy of the eighteenth century to the promotion of economic growth in the nineteenth century.
Posted by Mary L. Dudziak at 11:49 AM