More on Jefferson and Executive Power

Jeremy Bailey, author of a recent, highly lauded, book, Thomas Jefferson and Executive Power, weighs in on the Yoo/Fisher debate so nicely orchestrated in posts by Elizabeth Hillman. His comments complicate the picture of Jefferson and executive power, and help with way we might think about the contemporary implications of Jefferson's legacy str 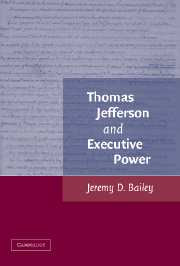 essed by Yoo and Fisher. Bailey's book, according to the Cambridge University Press description,

examines Thomas Jefferson's attempt to combine respect for a fundamental constitution with the fact that no set of laws can foresee every event. His solution to this problem offers a democratic, yet strong, alternative to the more common, Hamiltonian solution. Jefferson scholars have long written of 'two Jeffersons,' one before he became president and one after he became president. The first was opposed to a strong executive, while the second embraced one out of necessity. This book challenges this account. It presents Jefferson's understanding of executive power, which, though it developed over time, pointed to an executive that was both democratic and powerful.

Just one of the blurbs on Bailey is from Richard Bensel, Cornell:

"Jefferson was acutely sensitive to the potential, even inevitable, contradiction between the exercise of presidential power and respect for popular democracy. As president he attempted their reconciliation, simultaneously practicing and innovating a strikingly original theory of politics. In the process, as Jeremy D. Bailey thoroughly and convincingly demonstrates, Jefferson created one of the strongest and most enduring ideational bulwarks of the modern presidency."

Professor Fisher is right to emphasize that Jefferson never argued for an inherent executive authority. Professor Yoo is right to point out that Jefferson seemed to embrace a powerful executive. I make both points in my book. Others have made these points before. But two points need to be added:

First, I would argue that the LA Purchase fits within Jefferson’s larger political thought and even his political project. Contra Henry Adams, there were not “two Jeffersons,” one before the Revolution of 1800 and one after. Instead, throughout his career, Jefferson tried to figure out a way to make constitutionalism work, that is, to preserve a written constitution against events (both emergencies and opportunities) that that constitution could never predict. For example, Jefferson as wartime governor offers a way to understand Jefferson as president.

Second, part of Jefferson’s solution is his reliance on “declarations of principle,” which he saw as the institutional way for presidents to throw themselves on the people. For example, the Twelfth Amendment (the amendment to end the amendment process) was designed to create what we now call the mandate theory of the presidency so that presidents would be able to do just this (and the need to have the 12th in place before 1804 partly explains Jefferson’s silence on the LA amendment). As a result, the president would come to embody electoral revolution and thus possess a particular spirit of interpretation (letter to Cabell, August 1807, LOC). By gathering and directing the public will, the executive would become lawless in spirit.

What, then, to make of Jefferson? I think Professors Fisher and Yoo would, for different reasons, have a hard time accepting his model. But another question is the extent to which we are still living with the democratic presidency Jefferson created. I think so.

I should say here that I omitted discussion of several obvious subjects in the book (the war with the pirates, the war with the judiciary, and the problem of states rights). The publisher’s word count requirements forced me to make choices. I have since written an article on Jefferson’s coordinate theory of impeachments.

You can find Bailey's article, “Constitutionalism, Conflict, and Consent: Jefferson on the Impeachment Power,” in an upcoming issue of the Review of Politics. The September 2008 issue of Presidential Studies Quarterly will have an interesting review of Bailey, Jack Goldsmith, The Terror Presidency, and other recent works on executive power.