In spite of various sorts of whining accompanying this year’s Democratic National Convention, it is an historic moment in more than one way. It was not so long ago th 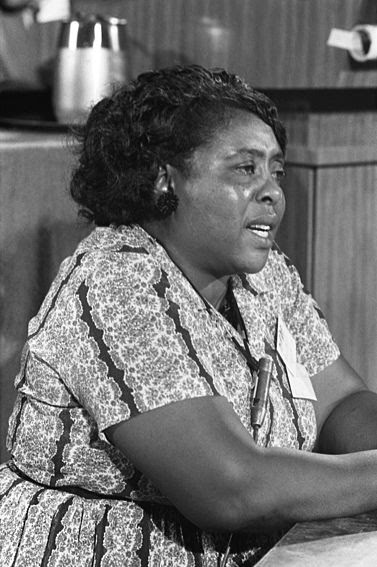 at an African American woman, Fannie Lou Hamer, captured the nation’s attention not with a convention floor speech but with testimony before the 1964 Credentials Committee of the DNC.
Hamer was a member of the Mississippi Freedom Democratic Party delegation, which challenged the seating of Mississippi’s all-white Democratic delegation. Hamer attempted to register to vote for the first time in 1962 at the age of forty-four, and as a result lost her position as a sharecropper on a plantation near Ruleville, Mississippi. She then became a field organizer for the Student Nonviolent Coordinating Committee, encouraging voter registration, and in the course of this work was detained and beaten by police in Winona, Mississippi, resulting in permanent kidney damage. Hamer told this story to the Credentials Committee to make the point that African Americans were brutally treated and disenfranchised, so the political process that resulted in selection of the state’s delegation was illegitimate. How could the national party seat them and ignore the representatives of disenfranchised African Americans? Her speech was so riveting that President Lyndon Baines Johnson called an impromptu press conference in an effort to draw media attention away from the MFDP. Parts of Hamer’s speech were nevertheless broadcast on the networks that evening.

Mr. Chairman, and to the Credentials Committee, my name is Mrs. Fannie Lou Hamer, and I live at 626 East Lafayette Street, Ruleville, Mississippi, Sunflower County, the home of Senator James O. Eastland, and Senator Stennis.

It was the 31st of August in 1962 that eighteen of us traveled twenty-six miles to the county courthouse in Indianola to try to register to become first-class citizens.

We was met in Indianola by policemen, Highway Patrolmen, and they only allowed two of us in to take the literacy test at the time. After we had taken this test and started back to Ruleville, we was held up by the City Police and the State Highway Patrolmen and carried back to Indianola where the bus driver was charged that day with driving a bus the wrong color.

After we paid the fine among us, we continued on to Ruleville, and Reverend Jeff Sunny carried me four miles in the rural area where I had worked as a timekeeper and sharecropper for eighteen years. I was met there by my children, who told me that the plantation owner was angry because I had gone down to try to register.

I had to leave that same night.

On the 10th of September 1962, sixteen bullets was fired into the home of Mr. and Mrs. Robert Tucker for me. That same night two girls were shot in Ruleville, Mississippi. Also Mr. Joe McDonald's house was shot in.

The four people that had gone in to use the restaurant was ordered out. During this time I was on the bus. But when I looked through the window and saw they had rushed out I got off of the bus to see what had happened. And one of the ladies said, "It was a State Highway Patrolman and a Chief of Police ordered us out."...

I was carried to the county jail and put in the booking room. They left some of the people in the booking room and began to place us in cells. I was placed in a cell with a young woman called Miss Ivesta Simpson. After I was placed in the cell I began to hear sounds of licks and screams, I could hear the sounds of licks and horrible screams. And I could hear somebody say, "Can you say, 'yes, sir,' nigger? Can you say 'yes, sir'?"

And they would say other horrible names.

She said, "I don't know you well enough."

They beat her, I don't know how long. And after a while she began to pray, and asked God to have mercy on those people.

I was carried out of that cell into another cell where they had two Negro prisoners. The State Highway Patrolmen ordered the first Negro to take the blackjack.

The first Negro prisoner ordered me, by orders from the State Highway Patrolman, for me to lay down on a bunk bed on my face.

I laid on my face and the first Negro began to beat. I was beat by the first Negro until he was exhausted. I was holding my hands behind me at that time on my left side, because I suffered from polio when I was six years old.

After the first Negro had beat until he was exhausted, the State Highway Patrolman ordered the second Negro to take the blackjack.

All of this is on account of we want to register, to become first-class citizens. And if the Freedom Democratic Party is not seated now, I question America. Is this America, the land of the free and the home of the brave, where we have to sleep with our telephones off the hooks because our lives be threatened daily, because we want to live as decent human beings, in America?

A link to an audio of Hamer’s testimony is here. An on-line documentary is here.

Hamer’s words continue to echo across generations, and are a reminder that a speech can have an impact. As much as the Obama campaign might wish to put race aside to appeal to an electorate that is more comfortable ignoring it, his speech tomorrow night and his nomination will be an enduring episode in American racial politics. Not a sign that a post-racial politics have been achieved, but a milestone nevertheless, in a history that transforms American politics even though it does not progress inevitably toward justice.
Posted by Mary L. Dudziak at 12:07 PM