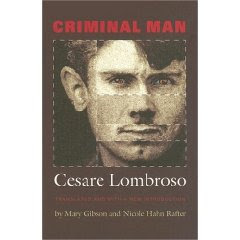 Mary Gibson and Nicole Hahn Rafter's meticulously edited new edition of Italian criminal anthropologist Cesare Lombroso's deeply influential Criminal Man (1876) is an invaluable contribution to the burgeoning historical scholarship on nineteenth-century criminology. No single scholar of criminality since Cesare Beccaria a century earlier exercised as much influence as Lombroso did in the late nineteenth century. Though always hotly disputed, his methodology and conclusions profoundly shaped the development of scientific attempts to understand the social and biological origins of crime. The fact that his most important work has only been available in English in two books of edited materials published in 1911 is as surprising as it is regrettable for students of criminological history.

What Gibson and Rafter offer is far more than a new translation of along-inaccessible text. First, by including selections from all five editions of Criminal Man (which grew from 256 pages in the original1876 edition to almost two thousand pages in four volumes in the final,fifth edition of 1896-97), the reader is able to see the evolution of Lombroso's thinking over time, as he developed an ever more complex classification system for criminals....

In their masterful introduction, Gibson and Hahn adroitly place Lombroso in historical context and approach his major work from a number of angles....Without soft-peddling his racism, sexism, biological determinism, poor scientific method, internal contradictions, or sloppiness, they show Lombroso as a man devoted to putting criminology on a scientific rather than purely philosophical basis, with the goal of improving society....

It is hard to imagine a better edition of this book.

The full review is here.
Deportation Nation: Outsiders in American History by Daniel Kanstroom (Harvard University Press, 2007) is reviewed in the Law and Politics Book Review by Leila Kawar, Department of Politics, Bates College. According to Kawar,

Kanstroom’s primary project in writing DEPORTATION NATION was to investigate the historical roots of the current system, purposefully going beyond the anti-immigrant politics of the 1990s. He argues that contemporary immigration controls, viewed in terms of [*528] normative principles, are simply among the cruder manifestations of a centuries-old practice of deploying deportation for social control purposes. The book traverses more than two-hundred years of American history, and even some Canadian history, to investigate “the pedigree” of the current deportation system. Kanstroom provides an exhaustive, almost archaeological (in the Foucauldian sense), tracing of the ideas that govern contemporary immigration control. The book is written as a series of stories. For each story, the author: 1) gives the historical context – documenting what legislators and administrators did, 2) describes how the judiciary responded, and 3) analyzes how in each case the Court’s jurisprudence contributed to the slow, incremental, and reactive construction of the principles that ground contemporary deportation policy.

This reflection on history with an eye to contemporary policies can be quite evocative....[T]he book is thought provoking. It forces us to think about deportation at length and in new ways.... Taken in historical perspective, the deportation provisions associated with the “War on Drugs” are seen as simply another manifestation of the tendency of Americans to enforce moralistic social control regimes through immigration law. Previous episodes include the Colonial “Warning Out” system, and the Progressive Era criminal deportation laws....

Kanstroom’s legal and social history of the US deportation system reveals the extent to which the law of immigration control has at times operated as a state of exception, exempted from the due process principles at the root of Anglo-American rule of law. 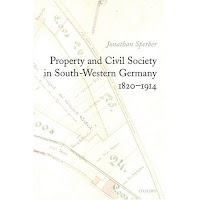 as Adam, Department of History,University of Texas at Arlington. Hat tip to H-Law. Adam writes:

With his new book, Jonathan Sperber aims to connect research on civil society with research on private property. For this purpose, he chose to study civil court records (paternity suits, bankruptcy and mental competency hearings, and other forms of civil litigation) from the Palatinate for the period from 1820 to 1914. He divides his book into four chapters. The first three chapters focus on basic aspects of private property in society: acquisition and transmission, transactions,and boundaries, while the fourth chapter provides more of a synthesis and periodization in property relationships.

He concludes that "Sperber's study is without a doubt a superb analysis of private property and the relations that sprung from it in nineteenth-century Germany. The same cannot be said about its contribution to discussions about civil society." The rest is here.
Posted by Mary L. Dudziak at 11:15 AM