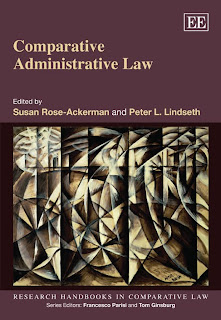 This Research Handbook is a comprehensive overview of the field of comparative administrative law. The specially commissioned chapters in this landmark volume represent a broad, multi-method approach combining perspectives from history and social science with more strictly legal analyses. Comparisons of the United States, continental Europe, and the British Commonwealth are complemented by contributions that focus on Latin America, Africa, and Asia. The work aims to stimulate comparative research on public law, reaching across countries and scholarly disciplines.

Beginning with historical reflections on the emergence of administrative law over the last two centuries, the volume then turns to the relationship of administrative and constitutional law, with an additional section focusing on the key issue of administrative independence. Two further sections highlight the possible tensions between impartial expertise and public accountability, drawing insights from economics and political science as well as law. The final section considers the changing boundaries of the administrative state - both the public-private distinction and the links between domestic and transnational regulatory bodies such as the European Union. In covering this broad range of topics, the book illuminates a core concern of administrative law: the way individuals and organizations across different systems test and challenge the legitimacy of public authority.
This extensive, interdisciplinary appraisal of the field will prove a vital resource for scholars and students of administrative and comparative law. Historians of the state looking for a broad overview of a key area of public law, reformers in emerging economies, donor agencies looking for governance options, and policy analysts with an interest in the law/policy interface will find this work a valuable addition to their library.

1. Révolution, Rechtsstaat and the Rule of Law: Historical Reflections on the Emergence of Administrative Law in Europe, by Bernardo Sordi

3. Testing Weber: Compensation for Public Services, Bureaucratization, and the Development of Positive Law in the United States by Nicholas Parrillo

4. Administrative Law and the Public Regulation of Markets in a Global Age by Marco d’Alberti

Others are historical as well, notably Thomas W. Merrill's "The Origins of American-Style Judicial Review," which I take to be the definitive version of an excellent paper, which develops an insight Roscoe Pound had (see, for example, Justice According to Law (1951), 73-74), that initially American courts analogized administrative agencies to courts "having no . . . record and not proceeding according to the course of the common law," so that "every fact necessary to the administrative determination might have to be shown de novo." Only gradually, Pound wrote, did "the good sense of American courts liberalize this situation" and a standard more like that of an appellate court reviewing a trial court of record emerged.

Just now, the volume is available only in hardback, at the very stiff price of $295. A paperback edition is due out in September.

Update: Rose-Ackerman and Lindseth have since posted the TOC and their introduction to the volume here.
Posted by Dan Ernst at 1:21 AM