For those interested in some of the questions about international history that I raised in an earlier post, the January issue of Common-place features an article by Brian Connolly calling for critical analysis of transnationality in the history of early America. In, “Intimate Atlantics” Connolly asks: “If we turn to the transnational as a critical frame in order to expose the fragility of the nation, where do we turn to the expose the fragility of the transnational?” He writes:

Common-place also has a review of Alison LaCroix, The Ideological Origins of American Federalism by Jonathan Chu. Chu writes: 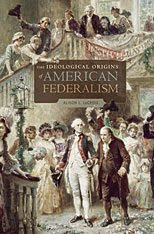 The Ideological Origins of American Federalism is an important work that points out the necessity of seeing Revolutionary developments in a larger context. In so doing it also makes three important specific contributions.It demonstrates how the arguments supporting opposition to British tax policies evolved into ideological and constitutional innovation. Second, in assessing the ideological legacies of the American Revolution, it compels us to reconsider Federalist history—our tendency to assume that the Constitution was simply the repudiation of a set of failed structures and intellectual paradigms and was the starting point for subsequent constitutional analysis. And third, like Jack Rakove's Original Meanings, it should give most serious pause to those who assume that the original intentions of the founders are easily discerned.

Read the rest of the review here.