Brown-Nagin, Courage to Dissent: Atlanta and the Long History of the Civil Rights Movement

2011 promises to be a blockbuster year in legal history-related books.  Published just this month is Tomiko Brown-Nagin's important new book, Courage to Dissent: Atlanta and the Long History of the Civil Rights Movement.  Hat tip to Al Brophy.  Here's the book description: 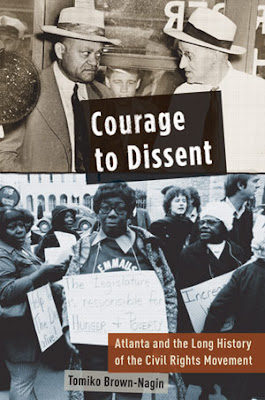 The Civil Rights movement that emerged in the United States after World War II was a reaction against centuries of racial discrimination. In this sweeping history of the Civil Rights movement in Atlanta--the South's largest and most economically important city--from the 1940s through 1980, Tomiko Brown-Nagin shows that the movement featured a vast array of activists and many sophisticated approaches to activism. Long before "black power" emerged and gave black dissent from the mainstream civil rights agenda a new name, African Americans in Atlanta debated the meaning of equality and the steps necessary to obtain social and economic justice.

This groundbreaking book uncovers the activism of visionaries-both well-known legal figures and unsung citizens-from across the ideological spectrum who sought something different from, or more complicated than, "integration." Local activists often played leading roles in carrying out the integrationist agenda of the NAACP, but some also pursued goals that differed markedly from those of the venerable civil rights organization. Brown-Nagin discusses debates over politics, housing, public accommodations, and schools. She documents how the bruising battle over school desegregation in the 1970s, which featured opposing camps of African Americans, had its roots in the years before Brown v. Board of Education .

Exploring the complex interplay between the local and national, between lawyers and communities, between elites and grassroots, and between middle-class and working-class African Americans,Courage to Dissent tells gripping stories about the long struggle for equality that speak to the nation's current urban crisis. This remarkable book will transform our understanding of the Civil Rights era.


"Courage to Dissent is a magnificent achievement, brilliantly analyzing significant tensions within the civil rights movement: between different classes, generations, local and national actors, proponents of direct action and litigation, clients and lawyers. Elegantly written, prodigiously researched, and compellingly argued, Brown-Nagin has made an extraordinary contribution."--Michael J. Klarman, Harvard Law School, and winner of the 2005 Bancroft Prize for From Jim Crow to Civil Rights

"In an excellent work, Professor Brown-Nagin shines a welcome spotlight on unsung 'movement lawyers' like Donald Hollowell, Howard Moore, Jr., and Len Holt--legal warriors and allies of civil rights activists whose courage and skill have gone unrecognized. In the process, she reminds us of the possibility of nobility in the law and the legal profession."--Julian Bond, Chairman of the National Association for the Advancement of Colored People, 1998-2010

"In her magisterial account of the Civil Rights movement in Atlanta, Tomiko Brown-Nagin shows that it was not just elites working at the national level who had the power to change the course of history. Rather, the grassroots, composed of thousands of ordinary citizens, was crucial. Working together involved lots of conflict; yet, Brown-Nagin opens the door on a truly amazing synergy that ushered in a long overdue revolution. Courage to Dissent is a masterpiece of rigorous scholarship, careful analysis and good old-fashioned story-telling."--Lani Guinier, Professor of Law, Harvard University

"This is an absolutely compelling study of the tangled history of civil rights in Atlanta following World War II (and especially Brown v. Board of Education ). No one interested in the actual operation of our fragmented legal system can ignore it, not to mention anyone interested in finding out more about the remarkable cast of characters who contended with one another in trying to shape the future of the South's most important city."--Sanford Levinson, Professor of Law and Government, University of Texas

Here's the table of contents.

Brown-Nagin is Justice Thurgood Marshall Distinguished Professor of Law and Professor of History at the University of Virginia, and an upcoming guest blogger on the Legal History Blog.
Posted by Mary L. Dudziak at 12:32 PM