That is the question to be addressed at the Capital City Constitution Day Celebration, sponsored by The Constitutional Sources Project (ConSource), on September 14, the 225th anniversary of the signing of the U.S. Constitution.  (The George Washington University Law School and the Historical Society of the District of Columbia Circuit are cosponsors.)  Here is the announcement: 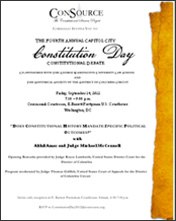 In the evening, lawyers, judges, policymakers, educators, and interested citizens will assemble in the ceremonial courtroom at the E. Barrett Prettyman U.S. Courthouse in Washington, D.C., to explore whether constitutional history requires or predetermines a particular jurisprudential or political outlook. Renowned legal experts Akhil Amar and Judge Michael McConnell will lead the discussion, which will be webcast to interested law students and other citizens around the country. Opening remarks will be provided by Chief Judge Royce Lamberth, United Stated District Court for the District of Columbia. The program will be moderated by Judge Thomas Griffith, United States Court of Appeals for the District of Columbia Circuit. If you are interested in attending this program, set to begin at 7:30 p.m., with an invite-only reception beforehand, please RSVP to ConstitutionDay2012@consource.org .