Via H-Law, we have the following announcement from the Princeton University Program in Law and Public Affairs: 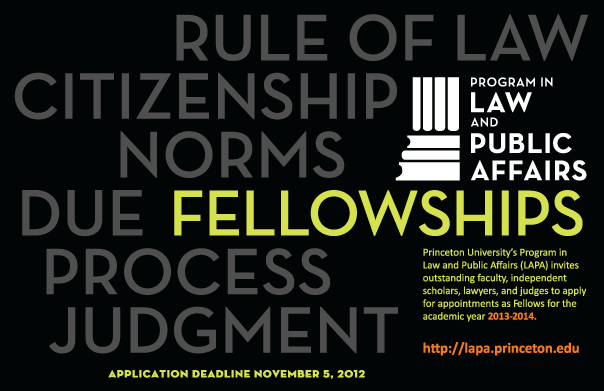 Princeton University’s Program in Law and Public Affairs (LAPA) invites outstanding faculty members, independent scholars, lawyers, and judges to apply for appointments as resident Fellows for the academic year 2013-2014. We anticipate naming up to six fellows who are engaged in substantial research on topics broadly related to law and public affairs or law and normative inquiry, including one LAPA/Humanities Fellow for an early career scholar working at the intersection of law and humanistic inquiry. Successful candidates will devote an academic year in residence at Princeton to research, discussion, and scholarly collaboration.

Applicants must have a doctorate, J.D. or an equivalent professional postgraduate degree.

Further information and the electronic application can be found at http://lapa.princeton.edu.