Another new one from the Law & Politics Book Review: a review of Pamela Brandwein, RETHINKING THE JUDICIAL SETTLEMENT OF RECONSTRUCTION (Cambridge University Press, 2011). Here's an excerpt from the beginning of the review, by Alec Ewald (University of Vermont): 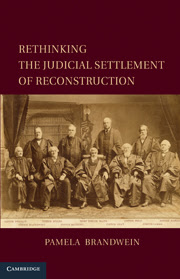 In Rethinking the Judicial Settlement of Reconstruction, Pamela Brandwein argues that in fact the Supreme Court did not “settle” Reconstruction at all, and that some of the Court decisions most commonly held up as overtly hostile to black rights were quite the opposite. This is a bold revisionist book, sure to challenge the assumptions of anyone who has written on or taught Reconstruction-era Constitutional history.

Brandwein’s main target is the “state action doctrine” as it developed in the decades immediately following the Civil War – that is, our understanding of that doctrine, which she argues is woefully incomplete. The state-action decisions, particularly the Civil Rights Cases of 1883, are commonly depicted as a judicial consolidation of the political abandonment of African Americans in the south (pp.10, 228). That’s wrong, for two reasons. First, she argues, the definitive abandonment of southern blacks by the Republican Party simply hadn’t happened yet: it took place only after 1891. Second, and central to the book, the “state action” decisions actually “provided the federal government with broad possibilities for rights enforcement” (p.12). Those possibilities rested on two forgotten strands of state-action jurisprudence: what Brandwein calls, respectively, “state neglect” and the “Fifteenth Amendment exception.”