A copy of Robert J. Kaczorowski's Fordham University School of Law: A History (Fordham University Press, 2012), has just landed on my desk.  As a fellow writer of a law school history, I dipped in at once.  Even a cursory reading shows that it transcends the usual limitations of the genre, so memorably described by Alfred S. Konefsky and John Henry Schlegel, to become not just the biography of an institution but a contribution to the history of legal education.  (If, as Michael Grossberg writes, "Histories of individual law schools tend more toward the celebratory than the cerebral," Kaczorowski has bucked the trend.)  William Nelson, NYU Law, lists three such contributions: (1) “it documents why large numbers of late nineteenth and early twentieth-century immigrants and their children needed the founding of Catholic law school”; (2) “it documents the factors that produce greatness in a law school”; and (3) “it traces a conflict over the funding of law schools.”

I’ll add that the book contributes to the Catholic and Jesuit (as we also say here at Georgetown) response to the legal realists, on which the starting point is still Edward Purcell’s Crisis of Democratic Theory.  Further, the third contribution Nelson identifies is especially timely as law faculties, responding to the decline in the market for their graduates, decrease class sizes and adopt other measures that call for reconsideration of transfer payments from law schools to the rest of their universities.  By showing how the fiscal policies of Fordham's administrators sent the law school into a decline after World War II, Kaczorowski provides an important object lesson for today's law deans and university presidents.  (Danielle Citron has made the same point over at Concurring Opinions.) 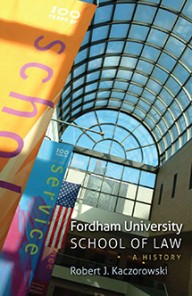 In this engaging, erudite new book, Robert J. Kaczorowski, director of the Condon Institute of Legal History, immerses readers in the story of Fordham Law School from the day it opened its doors in 1905 in the midst of massive changes in the United States, in the legal profession, and in legal education. Kaczorowski explores why so many immigrants and their children needed the founding of Catholic law schools in order to enter the legal profession in the first half of the twentieth century. He documents how, in the 1920s and 1930s, when the legal profession’s elites were actively trying to raise barriers that would exclude immigrants, Dean Wilkinson and the law faculty at Fordham were implementing higher standards while simultaneously striving to make Fordham the best avenue into the legal profession for New York City’s immigrants.

Tracing Fordham Law School’s history in the context of developments in legal education over the course of the twentieth century, this book pinpoints those factors that produce greatness in a law school and those that contribute to its decline. Fordham University School of Law: A History shows and explains why, prior to World War II, Fordham was one of the leading law schools in America and, along with Columbia's, one of the top two law schools in New York City. As one of those leading schools, Fordham was in the vanguard of legal education reform, and its faculty made important contributions to legal scholarship.

Fordham University School of Law: A History also reveals that, after World War II, the Law School suffered a decline, primarily because of inadequate funding resulting from the university’s fiscal policies. These policies brought the university’s administration into direct conflict with the American Bar Association (ABA) and the Association of American Law Schools (AALS), which consistently observed that the Law School was being starved for funds compared with its peer schools, with the result that peer law schools were improving their quality while Fordham was in decline. The conflict, which did not approach resolution at Fordham until the last quarter of the century, was replicated throughout legal education, especially in Catholic universities—yet this is the first scholarly work to document and explain it.

Kaczorowski’s wonderfully contextualized, meticulously documented history of Fordham Law School brings readers right up to the present day and traces how the Law School, with the unprecedented financial support and active involvement of its alumni, is resuming its prior position as one of the nation’s leading law schools.