Via Historically Speaking, we've learned that the June 2013 issue of the Journal of the Historical Society features a forum on Commonsense Anticommunism: Labor and Civil Liberties between the World Wars (University of North Carolina Press, 2012), by Jennifer Luff (Kalmanovitz Initiative for Labor and the Working Poor, Georgetown University). Here's the Press's description of the book: 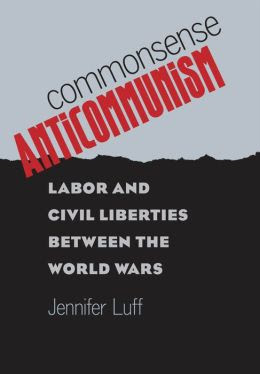 Between the Great War and Pearl Harbor, conservative labor leaders declared themselves America's "first line of defense" against Communism. In this surprising account, Jennifer Luff shows how the American Federation of Labor fanned popular anticommunism but defended Communists' civil liberties in the aftermath of the 1919 Red Scare. The AFL's "commonsense anticommunism," she argues, steered a middle course between the American Legion and the ACLU, helping to check campaigns for federal sedition laws. But in the 1930s, frustration with the New Deal
order led labor conservatives to redbait the Roosevelt administration and liberal unionists and abandon their reluctant civil libertarianism for red scare politics. That frustration contributed to the legal architecture of federal anticommunism that culminated with the McCarthyist fervor of the 1950s.

Relying on untapped archival sources, Luff reveals how labor conservatives and the emerging civil liberties movement debated the proper role of the state in policing radicals and grappled with the challenges to the existing political order posed by Communist organizers. Surprising conclusions about familiar figures, like J. Edgar Hoover, and unfamiliar episodes, like a German plot to disrupt American munitions manufacture, make Luff's story a fresh retelling of the interwar years.


"Truly an original piece of scholarship that makes a substantial contribution to the history of communism, anticommunism, labor, and American political history. This well-written and provocative book is evenhanded in its approach to controversial issues--readers will learn a great deal from it."
--Eric Arnesen, George Washington University


"A learned, nuanced, and comprehensive exploration of the role labor conservatives played in constructing the postwar Red Scare. This much needed and painstakingly researched book will be required reading of anyone looking to understand the origins and scope of the Red Scare."
--Ellen Schrecker, Yeshiva University

Here's a sneak peak of what you'll find in the Journal of the Historical Society forum. Luff writes:


I tried to follow the clues that the testimony of John Frey and J. Edgar Hoover gave me. In the end, I came up with Commonsense Anticommunism. The book argues that conservative officials of the American Federation of Labor were the vanguard of American anticommunism in the interwar years. The AFL's antisocialism and ingrained suspicion of state power produced an organic and reflexive opposition to Soviet Communism that pervaded the AFL from the first days of the Bolshevik Revolution. Yet AFL leaders played a paradoxical role, evangelizing against Communism while opposing statutory restrictions on Communist activity, and often clandestinely collaborating with federal repression of Communists while rejecting formal authority for federal repression. In keeping with their longstanding ethos, AFL leaders advocated a voluntarist approach to contain Communism, which relied on private citizens and organizations to identify and repudiate reds in their midst. AFL leaders viewed Communism as an obnoxious but legitimate political movement, not a cultural tendency or a catch-all for all sorts of radicalism, which put them at odds with many other antiradical and patriotic groups in the interwar years. I call their approach “commonsense anticommunism,” and I argue that labor anticommunists were a crucial backstop protecting civil liberties in the 1920s and early 1930s.

More information about the book is available here.
Posted by Karen Tani at 8:30 AM