Wolf skillfully weaves together a narrative of [nineteenth-century Virginian Samuel] Johnson's life, tracing his triumphs and defeats as he sought both freedom and a meaningful place in his community of Warrenton, Virginia. The man who emerges from Wolf's patient search through the archives, had, she writes, a "keen attentiveness to the law and to doing things in a proper, socially accepted way." Johnson also "yearned for legitimacy—a socially and legally secure place for his family and himself in his homeland of Virginia" (53). 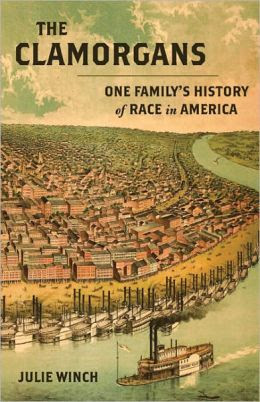 In The Law Could Make You Rich, Jared Hardesty (Ph.D. candidate, Boston College) reviews Julie Winch, The Clamorgans: One Family's History of Race in America (Hill & Wang, 2011). Hardesty begins the review as follows:


Governor Riggins, a leader of Boston's nineteenth-century black community, once publicly admonished a fellow person of color, William Patterson, and took the opportunity to offer a lesson to the community at large. Patterson had purchased unlicensed liquor for some fellow African Americans, and the authorities in Boston caught him red-handed. In the midst of dressing Patterson down, Riggins expressed the hope that the "law will make you smart." His proclamation to his fellow Afro-Bostonians—the law could be a source of empowerment for African Americans—may have been lost on Patterson, but it was a message that blacks across the United States heard loud and clear. Half a continent away in St. Louis, Missouri, the mixed-race grandsons of Jacques Clamorgan geared up to file suit and lay claim to their grandfather's extensive lands. For them, Riggins's message carried special resonance and an additional caveat. For the Clamorgan men, the law not only made them smart, but could also make them rich.

Did the Clamorgans have a legitimate chance to win their legal battles? In her wonderful The Clamorgans: One Family's History of Race in America, Julie Winch answers this question by offering readers a thorough examination of the family's past, especially their relationship with the law. . . .

The full issue is available here.
Posted by Karen Tani at 8:00 AM