A Short Book of Bad Judges

Best title ever: A Short Book of Bad Judges is a recently published volume by Graeme Williams, QC, from the English publishing house of Wildy, Simmonds and Hill. 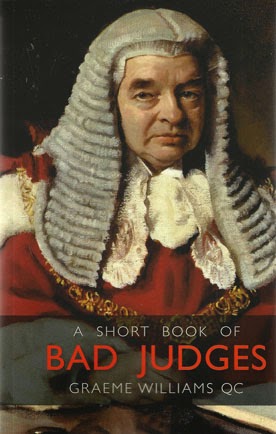 As Graeme Williams states "readers of John Milton and Beatrix Potter will know, reading about bad characters tends to be much more fun than reading about good ones. I confess to thinking that Paradise Lost and the Tales of Mr Tod, and of Two Bad Mice are all more entertaining to read than Paradise Regained or the Flopsy Bunnies and I have found that the same is true about writing about judges."

While there are plenty of books about Good English Judges: indeed their ‘goodness’ may well have been one of their authors’ main reasons for writing them, there is as yet no book specifically about Bad Judges in this country, though there are quite a few in the United States.

No doubt there are a number of reasons for this: the law of libel, within its limits, protects the living, and the old maxim de mortuis nil nisi bonum may protect the dead, at least for a decent interval post mortem.

In recent times there have been fewer Bad Judges than in the past, even though there are now more judges, at every level, than there were fifty years ago. The position today is no doubt the result of our modern, and on the whole very sensible and worthwhile practice, of appointing ‘new’ permanent judges only after they have attended judicial training, have sat as a judge in a part-time, temporary judicial post before appointment, and have performed in that capacity well enough to justify long-term judicial office.