New from the University of North Carolina Press: Freedom's Debt: The Royal African Company and the Politics of the Atlantic Slave Trade, 1672-1752 (Dec. 2013), by William A. Pettigrew (University of Kent). A description from the Press: 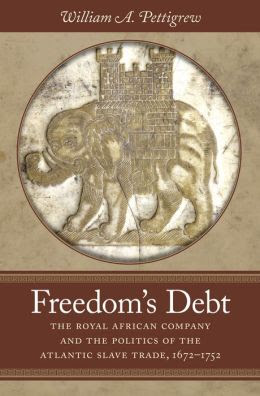 In the years following the Glorious Revolution, independent slave traders challenged the charter of the Royal African Company by asserting their natural rights as Britons to trade freely in enslaved Africans. In this comprehensive history of the rise and fall of the RAC, William A. Pettigrew grounds the transatlantic slave trade in politics, not economic forces, analyzing the ideological arguments of the RAC and its opponents in Parliament and in public debate. Ultimately, Pettigrew powerfully reasons that freedom became the rallying cry for those who wished to participate in the slave trade and therefore bolstered the expansion of the largest intercontinental forced migration in history.

Unlike previous histories of the RAC, Pettigrew's study pursues the Company's story beyond the trade’s complete deregulation in 1712 to its demise in 1752. Opening the trade led to its escalation, which provided a reliable supply of enslaved Africans to the mainland American colonies, thus playing a critical part in entrenching African slavery as the colonies' preferred solution to the American problem of labor supply.


"With startling precision, Pettigrew reveals the role of liberal political and market institutions in bringing about the massive eighteenth-century acceleration of the British Atlantic slave trade. All of us must ponder this deeply researched account of how 'a distinctively British conception of freedom' drove the expansion of slavery." --Christopher Tomlins