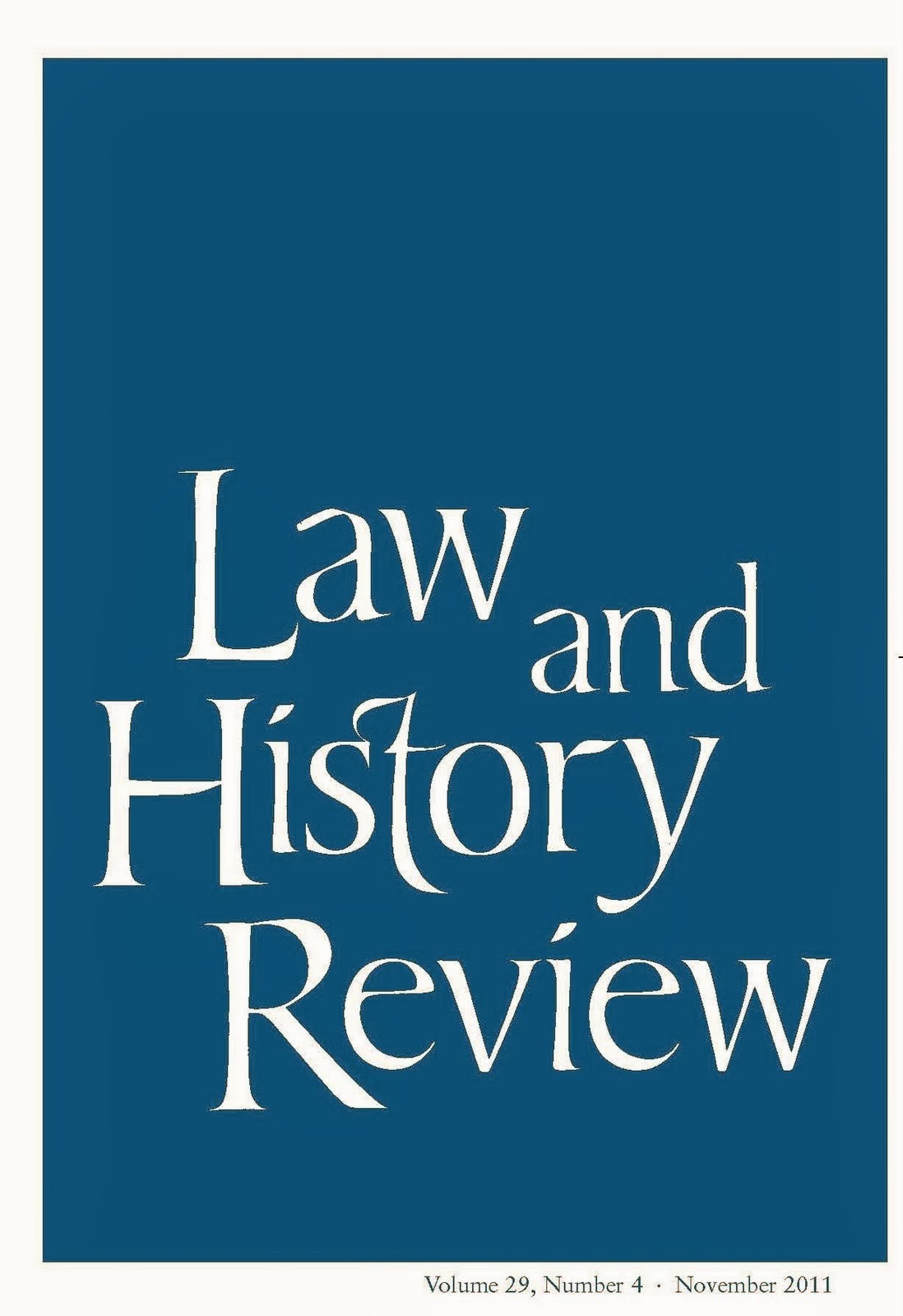 Volume 32, Issue 1 (February 2014) of Law and History Review is out on the Cambridge Journals website.  Here are its contents:

What societal factors prompt the shift from legal practices based upon oral or customary law to the development of new legal institutions predicated upon bodies of written law? Certainly the presence within a given society of a functional writing system, whether indigenously developed or cross-culturally borrowed, is a prerequisite for the creation of written law. Several scholars, however, notably anthropologists and sociologists, have argued that the mere presence of writing does not necessarily result in the immediate, or inevitable, development of certain sociopolitical institutions dependent upon the technological capacities that writing offers. These same scholars warn that assigning such a monocausal role to writing reduces the multifaceted complexity of a social phenomenon, such as the development of written law, to a teleological inevitability. Instead, many believe that writing provides what Jack Goody has called “potentialities” for types of developments and alternative configurations of social organization. That is to say, the technological capacities of writing provide the potential for specific institutional developments, such as the use of written law; however, for such potential to be actualized, there must first exist within the society an acknowledgement of a social need, with a concomitant consciousness that that need can best be satisfied through the implementation of a form of writing.

The theory of just war in medieval canon law and theology has attracted to it a large body of scholarship, and is recognized as an important foundation for Western approaches to the study of ethics in war. By contrast, the tradition on war in medieval Roman law has not received much attention, although it developed doctrines that are distinct from those in canon law and theology. The oversight is notable because medieval Roman law on war influenced subsequent tradition, forming with canon law the essential basis for early modern legal thought on war and peace. While the main canonistic contributions to legal theory on war came in the twelfth and thirteenth centuries, Roman jurists added new opinion in the fourteenth and fifteenth centuries, which can be related to the political life of Italy and to the growth of the independent cities. By the fourteenth century, Roman lawyers (or civilians) often considered licit war from a secular and pragmatic perspective, and associated a right of war with sovereignty. Here, I would like to trace the development of this theory, from roughly 1250 to 1450, and particularly a view that sovereigns licitly judged the justice of their own causes, as a remedy for a lack of superior authority.

“Apply to Muslims What Was Said of the Jews:” Popes and Canonists Between a Taxonomy of Otherness and Infidelitas
Stefan K. Stantchev

This article analyzes the targets of papal policies on Christians' relations with non-(Roman)Christians contained in canon law's On Jews, Saracens, and Their Servants in a historical period that has attracted comparatively little attention: the mid-thirteenth to the late fifteenth century. It argues the inherent ambiguity of the normative discourse on “proper” relations with “infidels.” On the one hand, popes and canonists faithfully preserved a taxonomy of otherness inherited from the church's ancient past. On the other hand, they often reduced all difference to the pastoral distinction between flock and “infidels.” The conflation of non-Christians occurred in multiple ways: through the explicit extension of a specific policy's targets, overt canonistic discussion, the tacit application of the law to analogous situations, or its simplification for use in the confessional. As a result, a number of policies aimed originally at a specific target were applied to all non-Christians. In the course of the later Middle Ages, a whole group of policies meant to define Christians' proper relations with others became potentially applicable against all non-Christians. In the words of a widely, if regionally disseminated, penitential work, all that was said of the Jews applies to the Muslims and all that was said of heretics, applies to schismatics.

Following Jacques Cartier's voyages up and down the St. Lawrence River in 1534, 1535–36 and 1541–42, French interest in the region surged. This interest was confined to the region's potential deposits of minerals, and then diverted realistically to the trade of furs, before ultimately, during the seventeenth century, it diversified to take into account the prospect of agricultural smallholding. So confined, this interest did not account for customary tenure and systems of property relations among indigenous inhabitants; generally these were matters avoided by merchants, traders, missionaries, and early settlers until the expediencies of settlement on the ground required otherwise. These were matters for which, in New France, the companies in charge devised no coherent policy. These were matters for which, at home, the French Crown was no beacon of advice either, meting out meager and inconsistent policies of empire before 1663, preferring instead to endorse trade monopolies while preparing for disputes with neighboring nations with competing designs to the New World.

The Preconstruction of Witness Testimony: Law and Social Discourse in England before the Reformation
Tom Johnson

In this article, I address the use of witness testimony by medieval and early-modern historians of England. Although the idea that such evidence straightforwardly represents the thoughts and feelings of quite lowly people has long been discredited, I think that some part of this assumption still haunts the thinking of our postmodern, or cultural turn, historiography. To put it rather too bluntly: the old, empiricist quest for “real voices” in testimonies has to some extent been replaced by a contemporary quest for “real discourses.” That is to say, the utilization of testimonies by historians often seems to boil down to the careful extraction of the particular discourse under examination—gender, class, childhood—from the legal discourses acknowledged to be inherent in witness testimonies produced in law courts. Now, this is a severely reductionist account, and later I will elaborate on the varieties and subtleties of current approaches. Nonetheless, this assumption that we can simply extrapolate social discourses about “x” from the legal discourses of the depositions seems to me somewhat flawed, because it presumes that premodern witnesses were simply conduits of discourse, whose testimony was nonetheless decisively shaped by the machinations of the legal counsel. In fact, as I will argue here, medieval witnesses were quite capable of manipulating such discourses, using clichés to tell the court what they thought it wanted to hear. In the subsequent discussion, I will look in detail at two intimately related cases from the Bishop of London's consistory court to make this point more explicit. First, I will relate the basic facts of these cases: the narrative of the events and the procedure of the courts. I will then address the historiography of witness testimony in greater detail, at the same time demonstrating the way in which the examples from the consistory counter the assumptions of this historiography. I will present different ways of reading my own examples using different positions within the scholarly literature, before showing how the case upsets even the most sophisticated of such readings. Overall, I argue that as well as considering the “construction” of the testimony by lawyers and legal counsels, and the “deconstruction” of such discourses by historians, we must begin to think about the “preconstruction” of the testimony by witnesses; their own integration of legalistic ideas into the fabric of their depositions. Finally, I will conclude by considering some of the wider implications of this argument for the use of witness depositions, and for the study of “law and society” more generally in the medieval and early-modern periods.

Twenty-something John Dunn remembered July 17, 1872 well. A witness for the defense in both a bastardy trial brought by 15-year-old Mary Morgan and a later seduction suit brought by her father, John would recount that summer day by drawing on the rough, sexual slang he likely used in conversations with male friends. After he was sworn in, John informed the legal participants and curious local spectators gathered at the Perry County Circuit Court that the July 17 buggy ride with young Mary had presented him with the opportunity to “feel of her titties and monkey.” John's testimony was hardly the most vulgar given during the proceedings. Another character witness, Robert B. Ward, disclosed a particularly salacious conversation he had overheard while in the “privy” behind a DuQuoin general store. Eavesdropping, Ward listened to two young men discuss Mary Morgan's “condition” with one another. The man Ward recognized, Thomas Williams, told his friend he would leave the state rather than marry a girl who “ran around screwing this one and that one,” if Mary did happen to “swear the child on him.” Thomas's buddy agreed that dodging the law would be preferable to matrimony with Mary for she had not “behaved herself.” “I have screwed her as often as I have fingers and toes, or oftener, and you know it,” he confided to Thomas. “Yes I know that,” Thomas replied, “She don't know more than a hog whose child it is.”