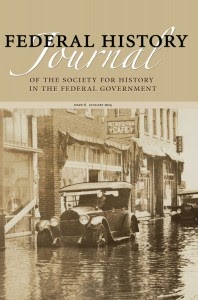 H-Law sent around the call for submissions to the January 2015 issue of Federal History, the journal of the Society for History in the Federal Government.  According to the call, "FH examines all aspects of U.S. government history as well as innovative work done in federal public history. FH is a peer-reviewed academic journal published both in print and online. The journal is indexed by ebscohost, and the editors welcome articles from both federal historians and those in academia.”

A link directed us to the January 2014 issue, which has articles of interest to legal historians:

The First Attempt at Federalizing Tort Law and Why It Failed
Ian J. Drake

“This ‘Who Shot John Thing’”: Disaster Relief as an Entitlement in the 20th Century
Natalie Schuster

Interpretation and Technology: Going Mobile: Changing the Face of Interpretation in the National Park Service
Brett Oppegaard and Gregory P. Shine
Posted by Dan Ernst at 9:30 AM