The baseball books keep on coming.  This week, over at Sports Law Blog, Nathaniel Grow, an Assistant Professor of Legal Studies in the Terry College of Business at the University of Georgia, is discussing his new book Baseball on Trial: The Origin of Baseball's Antitrust Exemption.  (The initial post is here.)  Professor Grow tells us that the book “provides the first comprehensive history of the 1922 Supreme Court case of Federal Baseball Club of Baltimore v. National League, the lawsuit giving rise to professional baseball's controversial exemption from federal antitrust law.” His posts will “summarize some of my more interesting discoveries and conclusions.”

Here’s the University of Illinois description of the book: 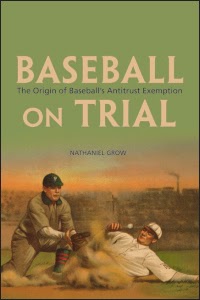 The controversial 1922 Federal Baseball Supreme Court ruling held that the "business of base ball" was not subject to the Sherman Antitrust Act because it did not constitute interstate commerce. In Baseball on Trial, legal scholar Nathaniel Grow defies conventional wisdom to explain why the unanimous Supreme Court opinion authored by Justice Oliver Wendell Holmes, which gave rise to Major League Baseball's exemption from antitrust law, was correct given the circumstances of the time.

Currently a billion dollar enterprise, professional baseball teams crisscross the country while the games are broadcast via radio, television, and internet coast to coast. The sheer scope of this activity would seem to embody the phrase "interstate commerce." Yet baseball is the only professional sport--indeed the sole industry--in the United States that currently benefits from a judicially constructed antitrust immunity. How could this be?

Using recently released documents from the National Baseball Hall of Fame, Grow analyzes how the Supreme Court reached this seemingly peculiar result by tracing the Federal Baseball litigation from its roots in 1914 to its resolution in 1922, in the process uncovering significant new details about the proceedings. Grow observes that while interstate commerce was measured at the time by the exchange of tangible goods, baseball teams in the 1910s merely provided live entertainment to their fans, while radio was a fledgling technology that had little impact on the sport. The book ultimately concludes that, despite the frequent criticism of the opinion, the Supreme Court's decision was consistent with the conditions and legal climate of the early twentieth century.