[We have the following announcement from the Historical Society of the District of Columbia Circuit.] 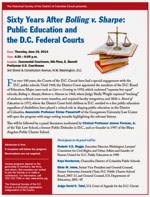 The special relationship between the Courts of the D.C. Circuit and the D.C. public schools was the subject of the Society's most recent program, "Sixty Years After Bolling v. Sharpe." The program can be viewed in its entirety on the Society's website. Listen as James Forman of Yale Law School moderates a discussion among Judge David S. Tatel; Kaya Henderson, Chancellor of the D.C. Public Schools; Rod Boggs, Washington Lawyers' Committee for Civil Rights and Urban Affairs; and Brian W. Jones, General Counsel of Strayer University on the significance of Bolling v. Sharpe and Brown v. Board of Education as well as key public education issues and challenges presented by the twin goals of achieving integration and improving education in public schools. Listen also to Eloise Pasachoff of Georgetown University Law Center as she highlights the history of the Courts' engagement with the D.C. schools, and read the full text of her remarks. The program can be viewed here.