"The New Doctrinalism" at Penn Law

We have word of a symposium sponsored by the University of Pennsylvania Law Review, entitled The New Doctrinalism from the morning of Friday, October 24, through the afternoon of Saturday, October 25.  As the organizers explain, the “symposium will examine the role that legal doctrine continues to play in different areas of American law, despite the continuing influence of American Legal Realism.”  They elaborate: 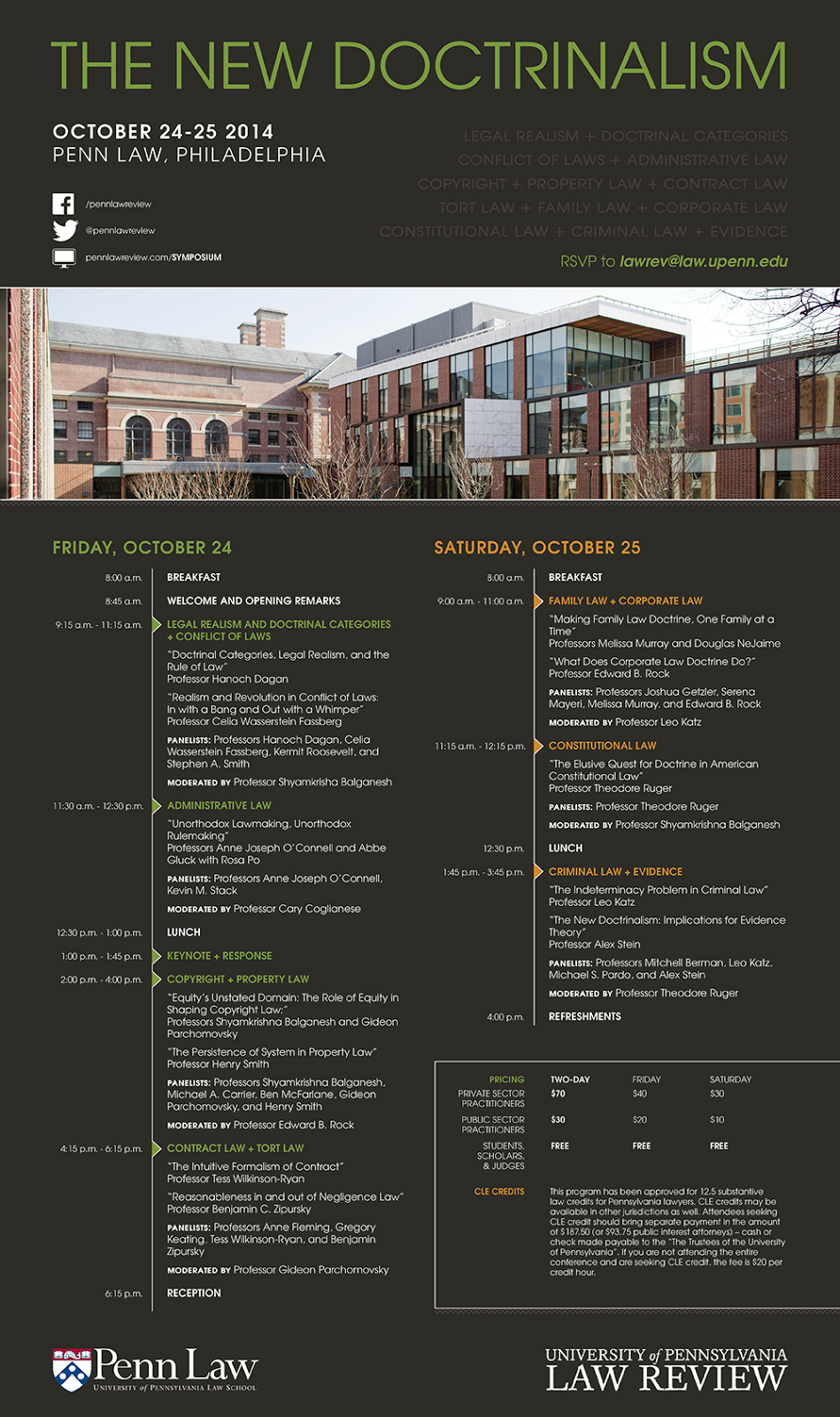 Since the 1930s, American Legal Realism has argued that law is not an autonomous discipline and that traditional legal materials—legislation, regulation and judicial precedent—are not, themselves, sufficient to determine the outcome of the most interesting legal disputes. How that gap is filled, with moral philosophy, industry practice, the idiosyncratic preferences of the judges, economics, etc., has been debated ever since. Yet legal practice and legal discourse remain stubbornly doctrinal. What explains this? It is this puzzle that the symposium hopes to uncover. We will host a wide group of prominent academics working in twelve different areas of the law, and ask them to reflect on this reality. Each scholar will focus on how and why his or her particular area of law has retained its "doctrinalism" in the face of the growing influence of interdisciplinary ideas.

I’m sure it will be a terrific conference, and not simply because my Georgetown colleague Anne Fleming will provide a historian’s perspective at one session.  Still, I think the organizing premise of opposition between legal realism and doctrinalism in “legal practice and legal discourse” is overstated.  To be sure, in one field of legal discourse, legal scholarship, we can find “The Singular Case of Underhill Moore" (in the estimation of John Henry Schlegel): a brilliant doctrinalist who, it was said (erroneously, Schlegel believes), threw out a “life’s work” of doctrinal research as “all wrong,” who tried to begin again as a behavioralist, and who ended up ridiculed by even his fellow realists.  Also, the legal realists wrote devastating reviews of the Restatements of the “American Law Prostitute,” on which see Laura Kalman’s Legal Realism at Yale.  (That reminds me: I’m surprised the organizers couldn’t find time for a wreath-laying ceremony at the tomb of William Draper Lewis.)  Finally, there was Jerome Frank’s famous claim that, in most cases, if a legal realist “starts with his conclusion, he can find satisfactory premises.  There are, so to speak, plenty of vacant premises, or at any rate, premises which can be sufficiently repaired or remodeled.”

Still, I think few realists thought that doctrine was just the dog’s tail.  After all, Charles Clark and others showed up and fought fiercely at the drafting sessions for the Restatements; one wonders why they bothered if they thought that blackletter law was epiphenomenal.  When Karl Llewellyn asked when judges thought title passed in sales or Walter Wheeler Cook wondered when they did or did not enforce covenants not to compete they did so not because doctrine did not matter but to make salient and critique the factual assumptions that led judges to make it as they did.

Jerome Frank certainly thought that the work of occupying, repairing, and remodeling premises was consequential.  In particular, it affirmed the power of the profession and discipline that maintained custody of the premises, strengthening the legal profession’s hand in its quarrels with political and professional rivals.  Quentin Skinner on Bolingbroke is some help here, but so is the experience of the legal realists themselves.  When Jerome Frank butted heads with the economist Leon Henderson at the Securities and Exchange Commission and William O. Douglas's protégé David Ginsburg quarreled with John Kenneth Galbraith at the Office of Price Administration, both realized (with Alvy Singer) that to prevail they “needed the eggs"–a priori arguments from "traditional legal materials."  They and other legal realists had no desire to kill the chicken that laid them.

Did I mention that CLE credit is available for attendees?
Posted by Dan Ernst at 12:30 AM