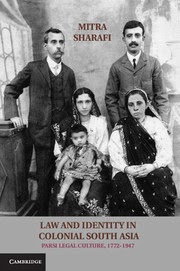 [We are very grateful to Nurfadzilah Yahaya, Research Fellow, Asia Research Institute, National University of Singapore, for this very full report on a panel at the recently concluded annual meeting of the American Society for Legal History.]

On Friday October 30th 2015, the ASLH convened the Author-Meets-Reader panel featuring Mitra Sharafi’s (University of Wisconsin, Madison) Law and Identity in Colonial South Asia: Parsi Legal Culture, 1772-1947, published by Cambridge University Press in 2014. The chair and moderator was Thomas Green (University of Michigan Law School and Oberlin College), while the Readers were Rohit De (Yale University) and Bhavani Raman (University of Toronto). Binyamin Blum (Hebrew University of Jerusalem) provided a comprehensive summary of the book by way of introduction to the panel.

Rohit De praised Sharafi’s book for pioneering the field of South Asian legal history along with the work of fellow panelist Bhavani Raman’s Document Raj: Writing and Scribes in Early Colonial South India (Chicago: University of Chicago Press, 2012). Prior to the publications of these two books, legal history of South Asia was dominated by two main arguments, the first being that law belonged to the colonial state, functioned as the state’s emissary, and was applied by brute force. Secondly, it was thought that most people lived outside the law which led to dominance without hegemony. While Americans might have made the law and lived the law, their South Asian counterparts certainly did not. Sharafi’s book succeeds in complicating both arguments by offering a more nuanced view.

Sharafi’s book addresses several fields, though not all were explicitly mentioned in the book, the first being Law and Religion. Scholars have written about how the colonial state ‘invented’ Hindu and Islam by privileging particular courts and legal ‘experts’, and through the process of translation, adjudication and codification. Law-making, in this case, was an abstractive process. However, the case of Parsi law was different. Parsis were marginalized unlike Hindus and Muslims who appeared more often. The making of Parsi Law was a result of secularized Zoroastrianism. The Parsi community desacralized Zoroastrian religious law and in this way, they were secularized.

By demonstrating how authority over women was substituted with new colonial patriarchy. Sharafi’s book also addresses the field of colonialism and gender. Licit and illicit sex by Parsis were differentiated for the first time during the colonial period. Parsi women were disadvantaged since they risked being punished for adultery while men did not. Prostitution was also stigmatized since mistresses were transformed into prostitutes. Then again, the first female lawyer in India was Parsi. What can we make of that, De asked? Although Mitra’s book shows how women were active users of courts as litigators, the book focuses more on masculinity since the book details male Parsis’ attempts in the creation of racial purity while displaying great anxiety about a dying race.

Since the Parsi population was diasporic, and frequently moved across parts of South Asia, Burma, East Africa and Southeast Asia, they were bound by the British Empire especially through law. Sharafi’s book is also a history of urban space and urban forms since Parsis owned several trust-owned property which dotted the urban landscapes in major cities. In addition, the book gestures towards the afterlife of Parsis colonial elite who became anti-colonial leaders. Indeed, Parsi lawyers remained prominent amongst the local elite in independent India. Sharafi’s book, in this way, speaks to the old-fashioned history of nationalism. One of her main protagonists, is after all, Dadabhai Naoroji who wore many hats. How did Parsi legal experience bear upon nationalist political project?

Mitra’s book speaks to the field of economic history. De cited Ritu Birla’s book on colonial law and construction of the economy in her book Stages of Capital: Law, Culture, and Market Governance in Colonial India which focuses on Hindu families and businesses. The Parsis were extremely wealthy, and had large control of financial assets in British India. The question is - Who paid for these trials that Sharafi examined in her book? How can we find the history of capital in history of litigation? What were the differences between different generations of lawyers across time? Finally, Rohit would like to know more about the materiality of lawyers’ work. How did her historical sources actually look like?

Sharafi’s book answers Robert Cover’s call to connect nomos and narrative by connecting affective, social and patriarchal links. Sharafi’s book portrays the Parsi as the quintessential mimic man. What does it mean for a nation for Parsi colonial subjects to enter into infrastructure of law during the colonial period? The Parsis were important economically speaking since they were involved in the China trade. Could economic and legal domains be regarded as analogous?

Sharafi’s book demonstrates the centrality of law in community-making through litigation involving property, marriage and divorce. In other words, heartbreak and heartache was where the identity of community was created. Sharafi’s Parsi actors allowed for the distinction of racial community through case-law which forms the vector for legal reason that shaped boundaries of race. The Parsis in Sharafi’s book de-Anglicized colonial law and deployed Parsi norms to break down the law to suit them. How did this phenomenon compare with Lauren Benton’s work on legal pluralism? Since Parsis’ legal actions broke down distinctions between public and private, her book can potentially re-narrate distinction between public and private. Law became an archive of cultural contestation.

Raman posed the following questions: What does this specific history tell us about colonial law? Sharafi’s book is full of contingent histories of law and identity. Scholars should stop thinking about demarcated capacities of law ie. state/non-state, public/private. Rather we should ask how does state create identities in the shadows of law. Was this a very mercantile attitude to law? Legal history seems to be receptive to mercantile communities.

Sharafi announced that she is writing an article that is a sequel to the book. After 1947, the independence movement radicalized in two ways – one violent, extremist, and the other, non-violent. Over time, Parsis became less important generally. During the early independent phase, Parsi lawyers were prominent and Parsi legal culture was based on the Rule of Law. De pointed out that Parsi lawyers seemed to have seamlessly passed into postcolonial India. Raman added that Parsis were not such a visible minority despite being an ubiquitous presence in court, and within the mercantile community in Bombay. Does it tell us something about their taking to law? Links between intimacy with law and constitutionalism needs to be drawn out.

Sharafi agreed with De that the subject gender and women did not form explicit frame of the book. On an earlier panel in late May 2015 at the Law and Society Association (LSA) conference in Seattle, historian Julia Stephens (Yale University) had already pointed this out. Sharafi explained that she did not want to make the story about women. She did not want to ‘ghettoize’ gender history. Women’s history is part of all history. Sharafi mentioned that there were not many female Parsi lawyers and with the exception of Cornelia Sorabji who aided Indian women in purdah, they were not prominent.

On the question of who paid for litigation, Sharafi answered that cases involving trusts were paid for by the trusts. Not surprisingly, these cases tended to be most acrimonious and very long and drawn out, often fought on principles with binary outcomes. In response to Raman, Sharafi stated that there was not much correlation between business and the law. She did note however that entering the legal profession was more a conduit for upward mobility for less well-off Parsis.

Sharafi emphasized that fighting over money was ultimately less serious than fighting over power. The Parsis were a minority subculture who solved problems through law over five generations in British India. The first generation was most interesting. They were mostly Parsi clerks working in East India Company courts where they closely observed how law worked. Later, they become leaders of the first lobbying movement to apply Parsi laws to marriages. Parsi laws had nothing to do with Zoroastrianism. Zoroastrians experienced a huge loss of scripture and religious knowledge since their migration from Persia to India during the medieval period. Hence, Parsi laws were different from Hindu and Muslim laws which were supposedly drawn from antiquity. Parsi laws developed out of colonial culture clash. It took about ten years for Parsis to create the statutes, survey their own community, collect people’s views, conduct internal debates, and eventually write up the statutes. Parsi fathers sent their sons to London to become barristers who then came back to Bombay to become judges.
Posted by Dan Ernst at 12:30 AM