Kaye Wins Barzun Prize for "A History of Balance"

The American Philosophical Society's 2015 Jacques Barzun Prize in Cultural History has been awarded to Joel Kaye, professor of history at Barnard College, in recognition of his book A History of Balance 1250-1375 (Cambridge University Press, 2014). The award presentation took place at the Society's Autumn General Meeting on November 13, 2015. 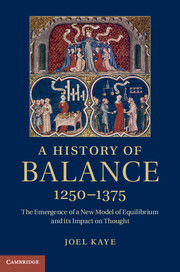 Joel Kaye's A History of Balance explores a peculiarly challenging subject: a large idea that seems to be everywhere but is not quite an idea. His title itself is a paradox or a sort of wager. How does one write the history of 'an unworded feeling' for how objects and spaces are or ought to be arranged, of an 'unworded sense' beneath the words that point to it or conceal it? The answer is simple but his practice is complex and subtle. He tracks the manifestations of the sense of balance through the thinking of a century and a quarter in four distinct areas: economics, medicine, political theory and natural philosophy. The contrasts among these areas are important but so are the confluences. Dr. Kaye finds in all of them an extraordinary range of new premises and assumptions: relation replaces hierarchy; mathematics moves its basis from arithmetic to geometry; estimation, approximation and probability become acceptable within the realm of knowledge; difference and diversity acquire a positive value. 'Each supports each', he says of his 'models of balance', 'each comes back to each'. This is how something that was 'never an idea' can belong so completely to the history of ideas.

The richness and care of Joel Kaye's attention to the work of, among others, Galen, Marsilius of Padua and Nicole Oreme are exemplary. Even when the alertness to balance in his sense begins to fade, when at the end of the fourteenth century 'the new model of equilibrium was imagined and evoked less and less by thinkers to explore the workings of either nature or society', he offers persuasive, interlocking explanations but proposes no final, single cause. He does suggest, though, that the 'retreat' of the model is 'as deep and wide-ranging' in its effects as its 'emergence' had been, and he invites us to think of parallel occasions in other times and places.
Posted by Dan Ernst at 1:00 PM