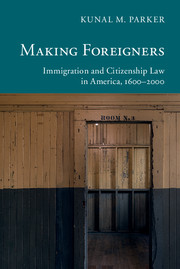 This book reconceptualizes the history of U.S. immigration and citizenship law from the colonial period to the beginning of the twenty-first century by joining the histories of immigrants to those of Native Americans, African Americans, women, Asian Americans, Latino/a Americans, and the poor. Kunal Parker argues that during the earliest stages of American history, being legally constructed as a foreigner, along with being subjected to restrictions on presence and movement, was not confined to those who sought to enter the country from the outside, but was also used against those on the inside. Insiders thus shared important legal disabilities with outsiders. It is only over the course of four centuries, with the spread of formal and substantive citizenship among the domestic population, a hardening distinction between citizen and alien, and the rise of a powerful centralized state, that the uniquely disabled legal subject we recognize today as the immigrant has emerged. The book advances new ways of understanding the relationship between foreignness and subordination over the long span of American history.

Endorsements by Linda K. Kerber, Mae Ngai, and Barbara Welke after the jump.
"Kunal Parker has accomplished the remarkable feat of challenging us to think differently about concepts - what it is to belong, what it is to be alien - that once seemed simple. Untangling the complexities of immigration from the Pilgrims to the Dreamers with a brilliant clarity, [he] traces the way that changing meanings of citizenship have been accompanied by paradoxical redefinitions of what it is to be foreign. As we struggle in our own political moment to reform immigration law, Making Foreigners offers indispensable perspective."
Linda K. Kerber, University of Iowa

"In Making Foreigners, Kunal Parker shows how American law defined alienage and citizenship in ways that have confounded simple oppositions of insider and outsider. [He] provides a powerful analysis of how various groups 'native' to American territory have been constructed as 'foreigners' in both law and society. Making Foreigners is a tour de force that makes us rethink how the very notion of being 'foreign' has little to do with where one might stand in relation to territorial boundaries."
Mae Ngai, Columbia University

"In this breathtakingly sweeping, yet concise, 400-year history, Kunal Parker highlights how through much of American history both immigration and citizenship law rendered individuals and entire groups, from both inside and outside the territorial borders of the United States, 'foreign'. In doing so, he challenges the dichotomy between insiders and foreigners and opens to question the current immigration and deportation regime."
Barbara Welke, University of Minnesota