Editorial (Thomas Duve).  A quarter century has passed since the German Democratic Republic joined the Federal Republic of Germany on 3 October 1990 in accordance with article 23 of the German Basic Law (GG). A nation disappeared from the world map and a new legal space emerged. 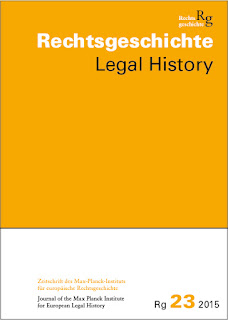 Did the reunification, however, also mark a turning point in the history of legal scholarship? How has legal scholarship in Germany developed over the course of the last 25 years: during a time characterised by a dynamic globalisation, but also particularly via the digitisation and economisation of legal and scientific systems? We, at the Max Planck Institute, have been pursuing this question via discussions with other scientists and researchers from various legal sub-disciplines over the course of the past several months. These exchanges and discussions served as the impetus for Julian Krüper’s contribution, in which he broaches the topic and considers the question concerning the possibility of a contemporary history of constitutional legal science, provides a broad overview of the current debate and, finally, applies the idea of a »farewell to the interim« to this debate.

The Focus section of this issue also deals with changing legal spaces: during the first millennium as well as during the 19th and 20th centuries. Although the eleven contributions all come from different contexts, they are connected in their reflection of ›legal spaces‹ – one of the four research focus areas at the Max Planck Institute. The thematic emphasis of the first seven contributions involves the »Forms of centrality in Late Antiquity and Early Middle Ages – normative and spatial dimensions«. This was also the topic of a conference in 2012 organised by Hartmut Leppin (Professor for Ancient History at the Goethe University), Wolfram Brandes and Caspar Ehlers (Research Field »Law as a civilising factor in the first millennium« at the Max Planck Institute for European Legal History). Given that Late Antiquity and the Early Middle Ages are generally considered to be periods of decentralisation or even regionalisation, and especially since so many projects and analyses have dealt with the peripheries, it seemed appropriate to focus here on forms of centrality. For while the concept of periphery has been the subject of much debate and the meaning of the developments at the peripheries emphasised, the complimentary concept of centrality has received a great deal less attention. The central question posed in the context of the conference was directed not only at political structures, but also at various form of centrality, whereby in the broadest sense (›actual‹ existing) hierarchies as well as (future-oriented) intentions are considered. Of course, the contributions cannot cover every aspect of such a broad field. Instead, they are meant to serve as impulses in order to reflect upon the transformation of the Mediterranean world not solely in terms of a decentralisation brought about by the dissolution of a great empire, but rather from the perspective of the new centres and the wide spectrum of their different functions.

The following three articles originate from the Atlantic world. Samuel Barbosa (USP, Brazil), Benedetta Albani and Thomas Duve (Max Planck Institute for European Legal History) organised a panel entitled, ›La Formación de Espacios Jurídicos Iberoamericanos (S. XVI–XIX): Actores, Artefactos e Ideas‹ within the context of the AHILA conference ›Entre espacios: La historia latinoamericana en el contexto global‹, which also served as the same theme for the subsequent conference held in September of 2014. The aim of this conference was to ask about how legal spaces were formed in the communication between the New and Old Worlds. A large number of the contributions will appear in the Jahrbuch für Geschichte Lateinamerikas – Anuario de Historia de América Latina 52 (2015) in the form of a dossier. Three representative contributions dealing with the 19th and 20th centuries have been selected to appear in the Focus section: from the Portuguese-Brazilian Empire; from the post-independence Hispano-American legal space; and, finally, from the ecclesiastic legal space with its centre in Rome. A contribution by Massimo Meccarelli (University of Macerata, Italy) rounds out the Focus with several reflections about legal spaces.

Debates also takes up a topic discussed in 2014 – or, in this instance, a topic that was not discussed. Peter Oestmann (University of Münster, Germany) called for a discussion at the 40th Deutschen Rechtshistorikertag in Tübingen about what it is we mean by ›theory‹ and ›praxis‹ in the context of our research. The discussion that ensued after his talk, admittedly, developed in a manner typical of many larger conferences: everyone who had something to say, felt the need to talk about his or her own work and about this or that specific detail. A debate about the actual issue posed by the speaker did not take place. In response to our invitation to follow this up in written form, we received several interesting contributions.

That things elsewhere are perhaps somewhat livelier, for instance, in France, is demonstrated by a few reviews in Critique. A glimpse into a completely different world is offered in Marginalia: in this section a description and transcription is provided of the trial conducted in Mexico in 1653 against worms. Jorge Traslosheros (UNAM, Mexico D.F.) rightly points out that we are dealing with more than just a historical curiosity here – and not only because discussions involving the legal status of humans and animals are again on the rise.
Posted by Dan Ernst at 11:00 AM