between the great corporation lawyer Elihu Root and the great German Jewish civil libertarian lawyer Louis Marshall (q.v. Victoria Saker Woeste's article in the Journal of American History 91 (2004).) In a 1916 address, published in the proceedings of the New York State Bar Association, Root argued that the appearance of millions of recent immigrants from Southern and Eastern Europe was endangering the Rule of Law. Coming from communities in which "the courts are part of the administrative system of the government, not independent tribunals" and "the law is contained in codes framed and imposed upon the people by superior power," they had never encountered "the principle of individual liberty which has grown out of the life of the Anglo-Saxon race." This great mass, Root warned, "will change us unless we change them." 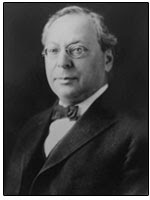 Louis Marshall replied in a letter to the New York Times. He denied Root's implication that lawyers of foreign birth or parentage embraced traditions of State control over liberty. "An overwhelming proportion of our immigrants have come to America because of their aspirations for individual liberty and their revolt against state control over liberty," Marshall countered. Root would have immigrants sojourn "forty years in a political purgatory" before admitting them to "the 'promised land' of true Americanism." In fact, America's immigrants required "no external influence to expel from their blood the servile conditions prevailing in the lands of their fathers."

After the Root-Marshall exchange, the following document probably is surplusage, but I usually assign it anyway. It's an excerpt from a report by Charles B. Sears on the New York State Constitutional Convention of 1915 for the Thursday Club of Buffalo, a literary and social circle. (Sears would later become a highly regarded appellate judge; the University at Buffalo's law library is named after him.)

A few episodes, not very important in the final work of the Convention, stand out in the minds of the delegates. Mr. C. H. Young, Delegate-at-large from Westchester County, proposed and had reported by the Committee on Suffrage the following new section to the Constitution:


After January 1, 1918, no person shall become entitled to vote on attaining majority by naturalization or otherwise unless such person is also able, except for physical disability, to read and write English.

Upon the debate which ensued a marked racial clanishness was exhibited. Mr. Gordon Knox Bell from New York [pictured, below left] made a speech on behalf of the English, Judge Clearwater of Kingston on behalf of the Dutch, Louis Marshall on behalf of the Jews, and Convention seemed about to resolve itself into hostile camps on the subject of pedigree. Bell, in his excitement, walking down into the well, thundered forth his praise of England at a speed which baffled the stenographer, and little of his remarkable speech appears in the record. I quote, however, from the meagre record a few of his sentences and some words of an interruption:

“Gentlemen, we must stop to think what we are. This is not a question of Nations, it is a question of races, and when all is said and done, there is not a man in this room who can deny that we are an English race, born and bred and brought up with the traditions of the men of England, of Anglo-Saxon stock. It is idle to bring to my view that that race is in the minority in our country–a little leaven leavens the whole lump, and if there is only one Anglo-Saxon left we cannot forswear our heritage. History shows, or your own hearts will show, if you stop to reason, it is true, we are Anglo-Saxon.* * *

Take the country where most of our ancestors came from, those bleak islands now so sadly at war. In that country they spoke all sorts of languages, resembling the medley spoke all sorts of languages, resembling the medley as in our country today. The came the French conquest, and then Geoffrey Chaucer at the end of the fourteenth century saw that by popularizing all of the English languages, taking what he could at the time as far as he was able in the Canterbury Tales, he made a vehicle of thought of which the people began to talk. And then came along the great reign of which my friend Mr. Beach spoke, of Prince Hal, when he came to the throne, and that was the first time that the Englishmen, as such, were solidified as a nation.

Mr. Unger – Mr. Chairman, will the gentleman yield to a question?

Mr. Chairman – Will the gentleman permit a question?

Mr. Unger – Will the gentleman advise whether or not it was Sir William Gilbert, of Gilbert and Sullivan, who wrote the immortal lines:

Mr. Bell – I thank you for the quotation. That is exactly what I would like to hear, but I am bold to say that there is a greater word that “Englishman.”

This speech was too much for Mr. Louis Marshall, and he bellowed forth his defense of the Jews in a voice which rang to every corner of the hall. Hear Mr. Marshall, who offered an amendment to change the word “English” in the proposed new section to “any language”:


There is not one drop of Anglo-Saxon blood that courses through my veins, and yet I think that I have as much appreciation of the spirit and genius of our institutions as has any member of this body.***

Let me tell you, for example, that there is in this State a body of people numbering over a million who read the Yiddish language. Many of them cannot read any other language. Most of them read newspapers published only in that language. I have before me a list of five newspapers published in the city of New York, whose average daily circulation, in Yiddish, is upwards of 500,000 in the aggregate–whose daily circulation combined is upwards 500,000 in the aggregate. There is one of those which has a daily circulation of 175,000 and that is on a very fair estimate of its circulation. It is the sworn statement of the editor of that newspaper. These newspapers are wide-awake. They reach an intelligent reading public, a reading public which obtains its opinions with regard to public affairs largely through their columns. They are publishing daily reports concerning what is going on in this Convention, with regard to the work which is here done. I have had occasion to read a number of those papers in the last few weeks and I find that they treat this Convention much more fairly than has a certain portion of the English press of the city of New York–much more fairly and much more intelligently and much more with a desire to instruct the people as to what is being done here and what the aspirations are to those who are seeking to draft a Constitution for the people of this State.***

They [the Jewish people] will tell you that at a time when the barons at Runnymede had to sign their marks to that document, the Magna Charta, their ancestors, who had no English or Anglo-Saxon blood flowing through their veins, were able to read and write. And although they did not participate in the Magna Charta and although they were made the objects of hateful discrimination in that document, those of their speech had previously educated the world in the Decalogue. They had developed a literature rich in every department of thought and one branch of them had given to the world the Sermon on the Mount. Yet we are told here that these people, because they may not be able to read the English language, because they come to our shores as refugees from oppression, ready to devote themselves and their thoughts and their hearts and their minds to the development of this country, who are able to read and write a language through which they can gain knowledge and information in regard to the affairs of this country, are unfit to exercise the right of franchise.

Mr. Marshall’s amendment was defeated[.] Mr. Young’s proposition was carried in the Committee of the Whole, but defeated in the Convention after numerous delegates had explained their votes; for example, Mr. Donovan said:

“Mr. Bell said here the other day that the Anglo-Saxon race settled the country. I concede that they did. They settled it, fixed the stage and arranged everything for the Irish to come and take possession. And they have had it ever since.”

Image Credit: Bell
Posted by Dan Ernst at 11:52 AM