Roy and Swamy, "Law and the Economy in Colonial India"

We missed this one when it came out last fall: Law and the Economy in Colonial India (University of Chicago Press, 2016), by Tirthankar Roy (London School of Economics) and Anand V. Swamy (Williams College). A description from the Press: 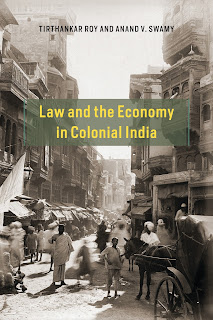 Since the economic reforms of the 1990s, India’s economy has grown rapidly. To sustain growth and foreign investment over the long run requires a well-developed legal infrastructure for conducting business, including cheap and reliable contract enforcement and secure property rights. But it’s widely acknowledged that India’s legal infrastructure is in urgent need of reform, plagued by problems, including slow enforcement of contracts and land laws that differ from state to state. How has this situation arisen, and what can boost business confidence and encourage long-run economic growth?

Tirthankar Roy and Anand V. Swamy trace the beginnings of the current Indian legal system to the years of British colonial rule. They show how India inherited an elaborate legal system from the British colonial administration, which incorporated elements from both British Common Law and indigenous institutions. In the case of property law, especially as it applied to agricultural land, indigenous laws and local political expediency were more influential in law-making than concepts borrowed from European legal theory. Conversely, with commercial law, there was considerable borrowing from Europe. In all cases, the British struggled with limited capacity to enforce their laws and an insufficient knowledge of the enormous diversity and differentiation within Indian society. A disorderly body of laws, not conducive to production and trade, evolved over time. Roy and Swamy’s careful analysis not only sheds new light on the development of legal institutions in India, but also offers insights for India and other emerging countries through a look at what fosters the types of institutions that are key to economic growth.

“Although colonial institutions have been blamed for wealth and poverty around the world, no one has analyzed how they developed over the entire history of colony—no one, that is, until Roy and Swamy. Their novel research in Law and the Economy in Colonial India lays bare the political and administrative problems that shaped the evolution of Indian legal institutions, with major economic consequences that persist to this day.” -- Philip T. Hoffman

“Indian civil courts are notorious for a backlog of cases and a slow process of dispute resolution—arguably a major retardant to India’s economic growth. Yet, at the same time, Indian courts draw upon British legal origins, particularly the common law, which has been credited for being relatively responsive and flexible to contractual needs in cross-country comparison. By incorporating cutting-edge concepts and debates in the economic literature on law and development with a rich historical discussion of the law in the Indian context, Roy and Swamy go a long way toward explaining this paradox. This is an interesting and well-written work on a very important topic.” -- Saumitra Jha