The Law and Society Association has announced its prizewinners for 2017 in advance of its annual meeting in Mexico City in June.  The recipient of the J. Willard Hurst Award, for the best book in Socio-Legal History published in 2016 is Heather Thompson, University of Michigan, for Blood in the Water: The Attica Prison Uprising of 1971 and Its Legacy  (Pantheon Books, 2016).  Here is the citation: 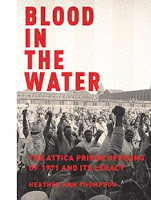 In Blood in the Water, Heather Thompson offers a searing account of the infamous 1971 Attica Prison uprising. In addition to reconstructing the protest and its violent aftermath, she traces the decades-long quest for justice by the victims of state violence. In doing so, she incorporates the voices and perspective of all the participants, rendering with equal power the voices and perspectives of prisoners, former hostages, families of the victims, lawyers, judges, state officials and law enforcement officers. The result is a rich account of law, policy, administration, legal consciousness, lawyering, legal process and truth, racial inequality, and communities that form around legal wrongs and lawsuits. Blood in the Water is a civil rights story that illuminates the epochal shift from rehabilitation to mass incarceration. It challenges readers to reckon with an abusive prison system and the persistent failures and lies of state officials.

An extraordinary feat of archival research distinguishes Blood in the Water. Thompson's brilliance lies in unearthing sources on the Attica prison riot that have never before been discovered, read, or analyzed. That research required not only more than a decade of effort, but persistence in the face of obstruction and restriction, and some lucky breaks. The payoff is new material on almost every facet of the uprising and its aftermath.

Blood in the Water stands out also as a powerful piece of writing. Thompson's prose is masterful and her storytelling is stunning. She succeeds in weaving together multiple voices, and restoring the humanity of the men, ordinary, poor and disfranchised, whose refusal to endure abuse and stay silent had seen them demonized. The epilogue is particularly powerful, serving to remind us that the lessons of Attica have yet to be fully learned. Her book will go a long way towards achieving this important goal.

The Society's prize for the dissertation that best represents outstanding work in law and society research in 2016 went to Sarah Seo, Princeton University, for “The Fourth Amendment, Cars, and Freedom in Twentieth Century America.”  It was nominated by Hendrik Hartog, Princeton University.  Here is the citation:


Sarah Seo's dissertation is an imaginative and beautifully written study of how the advent of cars on American roadways presented new challenges for policing, while it altered conventional notions of freedom and ultimately resulted in a new legal doctrine around Fourth Amendment guarantees against unreasonable search and seizure. Through meticulous attention to a wide range of primary-source materials and extensive examination of court decisions, Seo shows that the new technology of the automobile changed expectations of mobility and freedom, while at the same time destabilizing notions of private space and regulatory authority. Seo skillfully traces the way that these new realities shaped the development of legal doctrine and catalyzed a shift towards proceduralism in Fourth Amendment jurisprudence. In showing the links between technology, police practices, and legal change, Seo challenges long-standing explanations of the Warren Court's due process revolution. The selection committee was impressed with the creativity of the study, the quality of the data that was marshaled, the intellectual depth of the argument, and the elegance of the prose. Seo's dissertation makes a significant contribution to the literature on the Fourth Amendment and U.S. legal change more broadly.