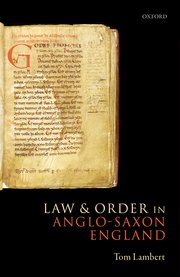 Law and Order in Anglo-Saxon England explores English legal culture and practice across the Anglo-Saxon period, beginning with the essentially pre-Christian laws enshrined in writing by King AEthelberht of Kent in c. 600 and working forward to the Norman Conquest of 1066. It attempts to escape the traditional retrospective assumptions of legal history, focused on the late twelfth-century Common Law, and to establish a new interpretative framework for the subject, more sensitive to contemporary cultural assumptions and practical realities.

The focus of the volume is on the maintenance of order: what constituted good order; what forms of wrongdoing were threatening to it; what roles kings, lords, communities, and individuals were expected to play in maintaining it; and how that worked in practice. Its core argument is that the Anglo-Saxons had a coherent, stable, and enduring legal order that lacks modern analogies: it was neither state-like nor stateless, and needs to be understood on its own terms rather than as a variant or hybrid of these models. Tom Lambert elucidates a distinctively early medieval understanding of the tension between the interests of individuals and communities, and a vision of how that tension ought to be managed that, strikingly, treats strongly libertarian and communitarian features as complementary. Potentially violent, honour-focused feuding was an integral aspect of legitimate legal practice throughout the period, but so too was fearsome punishment for forms of wrongdoing judged socially threatening. Law and Order in Anglo-Saxon England charts the development of kings’ involvement in law, in terms both of their authority to legislate and their ability to influence local practice, presenting a picture of increasingly ambitious and effective royal legal innovation that relied more on the cooperation of local communal assemblies than kings’ sparse and patchy network of administrative officials.

An online review by Dr Philippa Byrne is here.  TOC after the jump.

Introduction: Approaching Law and Order in the Early Middle Ages

PART I: THE FOUNDATIONS OF THE ANGLO-SAXON LEGAL ORDER
1. Law before AEthelberht
2. Kingship, Legislation, and Punishment in the Seventh Century
3. Royal Administration and Legal Practice to the Early Tenth Century
PART II: ORDER AND "THE STATE" IN LATE ANGLO-SAXON ENGLAND
4. Substantive Legal Change
5. Ideals of Kingship and Order
6. Local Legal Practice and Royal Control
7. Rights and Revenues
Conclusion: Continuity, Change, and the Norman Conquest
Bibliography
Posted by Dan Ernst at 9:30 AM