Bandung, Global History, and International Law: Critical Pasts and Pending Futures is out with Cambridge University Press. The volume is edited by Luis Eslava (University of Kent, Canterbury), Michael Fakhri (University of Oregon), and Vasuki Nesiah (New York University). From the publisher: 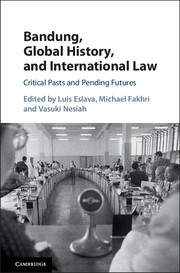 In 1955, a conference was held in Bandung, Indonesia that was attended by representatives from twenty-nine nations. Against the backdrop of crumbling European empires, Asian and African leaders forged new alliances and established anti-imperial principles for a new world order. The conference came to capture popular imaginations across the Global South and, as counterpoint to the dominant world order, it became both an act of collective imagination and a practical political project for decolonization that inspired a range of social movements, diplomatic efforts, institutional experiments and heterodox visions of the history and future of the world. In this book, leading international scholars explore what the spirit of Bandung has meant to people across the world over the past decades and what it means today. It analyzes Bandung's complicated and pivotal impact on global history, international law and, most of all, justice struggles after the end of formal colonialism.

"This book is an incredibly rich tool to all those seeking to understand the paths towards the civilizational transitions needed to face the multiple crises of climate, food, poverty, and meaning. It should be of great interest to students and scholars in fields well beyond international law, including anthropology, geography, sociology, global studies, and cultural studies." -Arturo Escobar

1. Anti-imperialism: then and now. B. S. Chimni
2. Newer is truer: time, space, and subjectivity at the Bandung Conference. Rose Sydney Parfitt
3. From Versailles to Bandung: the interwar origins of anti-colonialism. Fredrik Petersson
4. Bandung: reflections on the sea, the world, and colonialism. Samera Esmeir
5. Nationalism, imperialism, and Bandung: nineteenth-century Japan as a prelude. Mohammad Shahabuddin
6. Ghostly visitations: 'questioning heirs' and the tragic tasks of narrating Bandung futures. Adil Hasan Khan
7. Bandung 1955: the deceit and the conceit. Ibrahim J. Gassama
8. Not a place, but a project: Bandung, TWAIL, and the aesthetics of Thirdness. Vik Kanwar

9. Challenging the lifeline of imperialism: reassessing Afro-Asian solidarity and related activism in the decade 1955–1965. Katharine McGregor and Vannessa Hearman
10. Bandung, China, and the making of world order in East Asia. Chen Yifeng
11. Decolonization as a Cold War imperative: Bandung and the Soviets. Boris N. Mamlyuk
12. Central Asia as an object of Orientalist narratives in the age of Bandung. Akbar Rasulov
13. Latin American anti-imperialist movements and anti-communist states during the Bandung era. Liliana Obregón
14. Peripheral parallels? Europe's edges and the world of Bandung. John Reynolds
15. The Bandung Conference and Latin America: a decolonial dialogue with Oscar Correas. Germán Medardo Sandoval Trigo
16. A triple struggle: non-alignment, Yugoslavia, and national, social and geopolitical emancipation. Zoran Oklopcic
17. "Let us first of all have unity among us": Bandung, international law, and the empty politics of solidarity. Umut Özsu

Part III. Nations and Their Others: Bandung at Home:

18. The colonial debris of Bandung: equality and facilitating the rise of the Hindu right in India. Ratna Kapur
19. From Bandung 1955 to Bangladesh 1971: postcolonial self-determination and Third-World failures in South Asia. Cyra Akila Choudhury
20. Reimagining Bandung for women at work in Egypt: law and the woman between the factory and the "social factory." Mai Taha
21. Rethinking the concept of colonialism in Bandung and its African Union aftermath. Luwam Dirar
22. China and Africa: development, land, and the colonial legacy. Sylvia Wairimu Kang'ara
23. Bandung's legacy for the Arab Spring. Noha Aboueldahab
24. Applying the memory of the Bandung: lessons from Australia's negative case study. Rebecca LaForgia
25. Bandung in the shadow: the Brazilian experience. Fabia Fernandes Carvalho Veçoso

32. Bandung and the origins of Third World sovereignty. Anthony Anghie
33. Letters from Bandung: encounters with another international law. Sundhya Pahuja
34. Altering international law: Nasser, Bandung, and the Suez Crisis. Charlotte Peevers
35. Palestine at Bandung: the longwinded start of a re-imagined international law. Nahed Samour
36. "Must have been love": the non-aligned future of "a warm December." Anthony Paul Farley
37. The Bandung Declaration in the twenty-first century: are we there yet? Arif Havas Oegroseno
38. Virtue pedagogy and international law teaching. Hengameh Saberi