Papp Kamali on a Papal Interdict and Trial by Jury

Elizabeth Papp Kamali, Harvard Law School, has posted Trial by Ordeal by Jury in Medieval England, or Saints and Sinners in Literature and Law, which appears in Kate Gilbert and Stephen D. White, eds., Emotion, Violence, Vengeance and Law in the Middle Ages: Essays in Honour of William Ian Miller (Leiden: Brill, 2018): 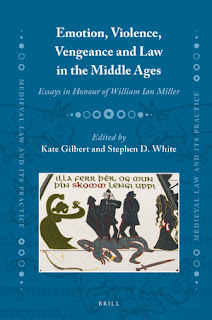 Using a miracle tale as a focal point, this paper illuminates the political and cultural context of York at the turn of the twelfth to thirteenth century in order to make sense of England’s rapid transition from trial by ordeal to trial by jury after 1215. More specifically, the paper highlights the possible impact of the period of papal interdict (c. 1208 – 1214), imposed by Pope Innocent III in response to King John’s intransigence over the appointment of a new archbishop of Canterbury, during this transitional period in criminal procedure. It argues that the interdict, with its suspension of liturgies, might have forced experimentation with alternative means of reaching verdicts in felony cases. The paper also suggests that juries might have been involved in the issuance of ordeal verdicts in the late ordeal period in England, in which case the shift from trial by ordeal to trial by jury may be less a moment of rupture than a transition from one form of trial using juries to another, albeit a trial form more starkly desacralized after 1215. It is the author’s hope that the paper will serve as a starting point for further research, not a decisive answer to the questions it raises, including whether England’s rapid adoption of final jury verdicts may owe something to the tussle between King John and a particularly imperial and imperious pope.