Fernandez's Pierson v. Post: The Hunt for the Fox

Cambridge University Press still lists it as coming soon and not published until next month, but I've already spotted it on Google books, and I’m teaching the case for the 45th time (more or less) this afternoon, so I’m posting now anyway.  That’s right, Pierson v. Post, The Hunt for the Fox: Law and Professionalization in American Legal Culture, by Angela Fernandez, University of Toronto Law, is or is almost out in the series Cambridge Historical Studies in American Law and Society: 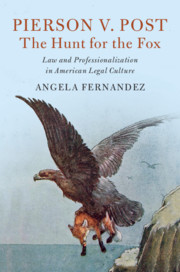 The 1805 New York foxhunting case Pierson v. Post has long been used in American property law classrooms to introduce law students to the concept of first possession by asking how one establishes possession of a wild animal. In this book, Professor Angela Fernandez retells the history of the famous fox case, from its origins as a squabble between two wealthy young men on the South Fork of Long Island through its appeal to the New York Supreme Court and entry into legal treatises, law school casebooks, and law journal articles, where it still occupies a central place. Professor Fernandez argues that the dissent is best understood as an example of legal solemn foolery. Yet it has been treated by legal professionals, the lawyers of its day, and subsequent legal academics in such a serious way, demonstrating how the solemn and the silly can occupy two sides of the same coin in American legal history.

"A new generation of legal historians now has its leading essayist. Fernandez explodes the 'cases in context' genre with essays ranging across literary, social and intellectual history. Sprightly, but with painstaking research and impressive learning, she discovers in a judge's witticisms fresh insights into how lawyers and law professors distance themselves from the strife from which they profit."

"Fernandez' masterful book comprehensively reinterprets one of the great old chestnuts of American legal history. Her glittering prose and impressive research make this a must read for historians, lawyers and anyone seeking to understand how the law worked and what it has come to mean."

"In this splendid work of legal archaeology, Fernandez painstakingly reconstructs the strange career of Pierson v. Post, shining considerable light on the professional culture within which it has attained the status of a leading case. Deeply researched and beautifully crafted, this book is a major contribution to the field of legal history, prompting critical reflection on the ways and means by which conventional wisdom is constructed and reconstructed over time."

Susanna Blumenthal - University of Minnesota
Posted by ernst at 11:00 AM