Robert Icenhauer-Ramirez, an attorney holding a doctorate in history from the University of Texas, Austin, has published Treason on Trial: The United States v. Jefferson Davis, in LSU Press’s book series, Conflicting Worlds: New Dimensions of the American Civil War: 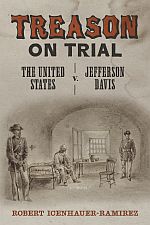 In the immediate aftermath of the Civil War, federal officials captured, imprisoned, and indicted Jefferson Davis for treason. He faced execution if found guilty for his role in levying war against the United States. Although the federal government pursued the charges for over four years, the case never went to trial. Most historical analyses of the case focus on interpreting the political reasons why that happened by analyzing the reasons in the broadest national contours. According to Robert Icenhauer-Ramirez, these global assessments, while important, do not attempt to discern how the lives and experiences of those individuals responsible for either prosecuting or defending Davis, or those with a direct interest in the outcome, influenced the handling of the case. He argues that while national politics had a role in the direction of the case, it was the actions and decisions of lesser-known men and women that ultimately were responsible for the failure to convict Davis. Treason on Trial: The United States v. Jefferson Davis focuses on precisely why that happened.