Kotch on the Death Penalty in North Carolina 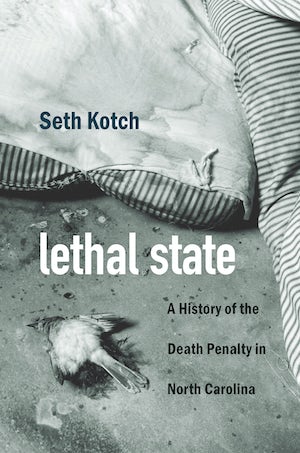 For years, American states have tinkered with the machinery of death, seeking to align capital punishment with evolving social standards and public will. Against this backdrop, North Carolina had long stood out as a prolific executioner with harsh mandatory sentencing statutes. But as the state sought to remake its image as modern and business-progressive in the early twentieth century, the question of execution preoccupied lawmakers, reformers, and state boosters alike.

In this book, Seth Kotch recounts the history of the death penalty in North Carolina from its colonial origins to the present. He tracks the attempts to reform and sanitize the administration of death in a state as dedicated to its image as it was to rigid racial hierarchies. Through this lens, Lethal State helps explain not only Americans' deep and growing uncertainty about the death penalty but also their commitment to it.

Kotch argues that Jim Crow justice continued to reign in the guise of a modernizing, orderly state and offers essential insight into the relationship between race, violence, and power in North Carolina. The history of capital punishment in North Carolina, as in other states wrestling with similar issues, emerges as one of state-building through lethal punishment.


"With poignant prose and an acute analytical eye, Kotch has written a harrowing and unforgettable history that exposes the inequity of the death penalty in the United States. Some of this eye-opening and moving story is peculiar to North Carolina, but, alas, much of it is not. Anyone interested in how the death penalty has been applied and why it continues to be applied in the United States should read Lethal State."--W. Fitzhugh Brundage

"Few historical studies have so thoroughly refocused my understanding of one of the foremost issues of our time: the criminal justice system's persistently inequitable treatment of African American men. Beautifully and passionately written, Lethal State should convince any fence-sitter that the arbitrary, utterly unjustly administered death penalty should finally become thing of the past, as it has in every Western nation except the U.S."--Jacquelyn Dowd Hall