Leonard and Cornell, "The Partisan Republic"

Cambridge University Press has published The Partisan Republic: Democracy, Exclusion, and the Fall of the Founders' Constitution, 1780s-1830s, by Gerald Leonard (Boston University) and Saul Cornell (Fordham University). A description from the Press: 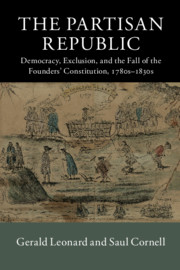 The Partisan Republic is the first book to unite a top down and bottom up account of constitutional change in the Founding era. The book focuses on the decline of the Founding generation's elitist vision of the Constitution and the rise of a more 'democratic' vision premised on the exclusion of women and non-whites. It incorporates recent scholarship on topics ranging from judicial review to popular constitutionalism to place judicial initiatives like Marbury vs Madison in a broader, socio-legal context. The book recognizes the role of constitutional outsiders as agents in shaping the law, making figures such as the Whiskey Rebels, Judith Sargent Murray, and James Forten part of a cast of characters that has traditionally been limited to white, male elites such as James Madison, Alexander Hamilton, and John Marshall. Finally, it shows how the 'democratic' political party came to supplant the Supreme Court as the nation's pre-eminent constitutional institution.


"A superb, deftly written history of the unsettling transformation of an aristocratic-tinged constitutional republic to a partisan white male democracy." -- Mary Sarah Bilder

"'The Partisan Republic tells a story of constitutional decline - from the republican vision of the Framers to an antebellum Constitution that, although more democratic, was also more aggressive in its defense of states' rights and its exclusion of all but white males from civic participation. With clarity and insight, Leonard and Cornell give us a Constitution that was from the beginning a living constitution, continually reinterpreted." -- Bruce Mann