[We have word of the following publication.  DRE]

Law’s Dominion is a detailed study of Jewish communal autonomy in the century prior to the French Revolution.  Set in the city of Metz, this new examination of a vibrant prerevolutionary community draws on a wide spectrum of unknown or underutilized legal sources that tell a story about communal governance, religion, and family that has not been told before. Concentrating on the community’s leadership, public institutions, and judiciary, Law’s Dominion challenges the commonly held assumption that Jewish life was in a steady state of decline before the French Revolution. To the contrary, it presents a portrait of a robust community that integrated religious values and civic consciousness, interacted with French society, and showed remarkable signs of collaboration between Jewish law, general law, and the French judicial system. 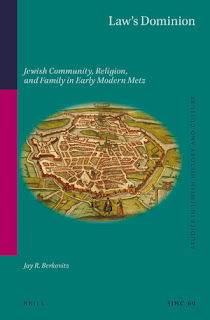 The focus of Law’s Dominion is the emergence of “the rule of law” as the basic principle of Jewish social and political organization. Law served as the community’s core cultural value and as the foundation for the relationship of the Jews to the state and the surrounding society. Through the process of juridification—the institutionalization of law and judicial frameworks—vast areas of communal life were subsumed under the authority of the law, particularly as the community took greater notice of external legal and judicial systems. Building on the author’s previous works, Law’s Dominion offers new evidence of how practitioners of Jewish law, as well as its consumers, navigated the Jewish and French legal systems. Communal registers of the Metz Kahal, judicial records of the rabbinic court and Metz Parlement, rabbinic responsa literature, and the French translation of Jewish law commissioned by French authorities furnish a wider framework and  broader context for the analysis of Jewish law, legislation, and public policy. By focusing on prevailing norms, mechanisms of change, and emerging patterns of legal culture, Law’s Dominion seeks to understand how rabbinic and lay leaders struggled to meet challenges to their authority.

Central to the inquiry undertaken in this new volume is the question of how religion functioned in the early modern period and the degree to which it served the goals of social cohesion and corporate identity. Religion continued to exert a formative, if occasionally contested, impact on the values embraced by communal leaders and on the boundaries that defined relations with the state and society. Rituals embodied modes of thinking about historical origins, about interactions with the surrounding culture and society, and about identification with particular cultural traditions.

In addition to embodying the foregoing themes, legal texts pertaining to family offer entrée into a web of culture and relationships for which there is virtually no other documentation. The majority of cases that came before the Metz Beit Din were related, either directly or indirectly, to inheritance, guardianship of children, marital property, sexuality, and the participation of women in the judicial process. Rulings in these areas, and the legal mechanisms that evolved in response to changing social and economic conditions, contain images of women and family that are strikingly at variance with representations conveyed in prescriptive legal sources alone.

Emerging from this analysis is a new narrative that reconsiders central themes of pre-modern Jewish history:  the nature and scope of Jewish communal autonomy; the relations between the Jews and the state; Jewish interaction with the surrounding society and culture; the multifaceted nexus between acculturation and modernization; lay-rabbinic relations; the role of religion in early modern culture; and transformations in family life.

In sum, Law’s Dominion seeks to elucidate the complicated role of law in the life of a community that faced significant internal and external challenges to its precarious political condition, religious ethos, and cultural identity.
Posted by ernst at 4:00 PM