Downs, "The Second American Revolution The Civil War-Era Struggle over Cuba and the Rebirth of the American Republic"

The University of North Carolina Press has published The Second American Revolution: The Civil War-Era Struggle over Cuba and the Rebirth of the American Republic (Nov. 2019), by Gregory P. Downs (University of California, Davis). A description from the Press: 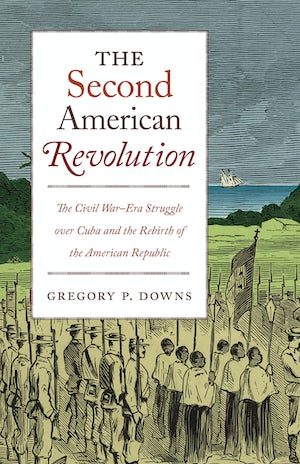 Much of the confusion about a central event in United States history begins with the name: the Civil War. In reality, the Civil War was not merely civil--meaning national--and not merely a war, but instead an international conflict of ideas as well as armies. Its implications transformed the U.S. Constitution and reshaped a world order, as political and economic systems grounded in slavery and empire clashed with the democratic process of republican forms of government. And it spilled over national boundaries, tying the United States together with Cuba, Spain, Mexico, Britain, and France in a struggle over the future of slavery and of republics.

Here Gregory P. Downs argues that we can see the Civil War anew by understanding it as a revolution. More than a fight to preserve the Union and end slavery, the conflict refashioned a nation, in part by remaking its Constitution. More than a struggle of brother against brother, it entailed remaking an Atlantic world that centered in surprising ways on Cuba and Spain. Downs introduces a range of actors not often considered as central to the conflict but clearly engaged in broader questions and acts they regarded as revolutionary. This expansive canvas allows Downs to describe a broad and world-shaking war with implications far greater than often recognized.


"A bold and refreshing interpretation of the Civil War that challenges scholars to bring the singular story out of its narrow, hyperspecialized confines of national history, reframing it into a watershed moment shaped by hemispheric and global forces that remade the nineteenth-century Atlantic world."--Matt D. Childs

"With beautiful, elegant prose, Downs takes the old topic of the revolutionary quality of the Civil War and moves it forward in unexpected and exciting ways by putting it in conversation with the revolutionary nature of the Atlantic in the same period. This is a truly pioneering and innovative book."--Michael Vorenberg