In a terrific book about notaries in colonial Cuzco, Peru, Kathryn Burns reminds us how frequently official writers distorted, left blank, and forged contracts and parts of court cases, leaving traces of their control over the order of the historical record.[1]  But, if official writers held the power to shape the archive, at the same time, ordinary Spanish colonial subjects—many of whom did not read or write themselves-- commandeered the form of legal protocols and served as legal agents outside of court.

The notary-free contract was a part of daily life, and it crossed any simple divide between colonizer and colonized, enslaved and free, state and subject.  People picked up and reproduced, out loud, in rough orthography, on the backsides of printed text and scraps of paper, the formula for contracts that had been set in manuals for legal personnel. (cont'd)
One of the most popular and widely circulated of these in the Spanish empire was the 1603 “Curia Filípica” published under the authorship of the peninsular-born Lima jurist Juan Hevia Boloño. Today, scholars debate the true authorship of Hevia’s handbook, arguing that its erudition and the very light incorporation of “American” elements concerning commercial law and Atlantic trade indicate that it was a copy of a manual of Spanish peninsular origins.[2]

But perhaps the uncertain provenance of the Curia Filípica is the point. No legal manual, and certainly no contract, was really sui generis. They were copies of copies. Manuals and legal treatises and histories all built on authoritative prior accounts until the late eighteenth century and even beyond. Some of these legal writings were Americanized versions of peninsular formulas, some local copies of national or transnational forms, but all repeated and traced over the putative originals until coming first no longer mattered.

The tendency for ordinary people in Latin America to trace and copy legal documents— before, after or without obtaining official imprimatur on their pages--endures. Historian Judith Mansilla, who will be joining me in the next two posts, connects the legal habits of contemporary rural Peruvians to the colonial past. Consider the wills and testaments of Liduvina López and her husband Elías Gavino Quispe in 1999, in which they divided property between their seven kids, most of whom had moved to Lima. They copied by hand (or had someone in their pueblo in the province of Huarochiri copy) their official wills on lined notebook paper with a ballpoint pen, later getting a notarized seal. 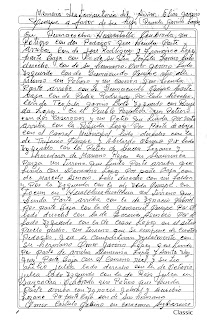 
Image courtesy of Judith Mansilla, with the permission of Priscila Gavino López.

While always susceptible to being challenged in court, copies, extralegal contracts, and verbal agreements bound Latin Americans not only to the law but also to one another. In the next two posts, Judith joins me to share tales of legal “tratos” from seventeenth-century Lima to illustrate this.

--Bianca Premo
[1] Kathryn Burns, Into the Archive: Writing and Power in Colonial Cuzco (Duke, 2010).
[2] You can learn more about the Curia Filípica from a blog post Yale Law Library’s Rare Book Librarian Mike Widnener. https://library.law.yale.edu/news/hispanic-heritage-acquisitions-famous-procedure-manual
Posted by Bianca Premo at 12:30 AM