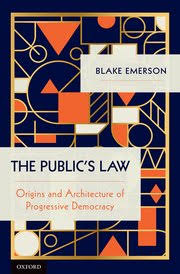 [This is the third of three posts from an "author-meets reader" session on Blake Emerson's The Public's Law, held at the American Society for Legal History at its annual meeting on November 22, 2019.  The series begins here, with my summary of the book and continues with Noah Rosenblum's comment.  What follows is the response of Blake Emerson, Assistant Professor of Law at UCLA.  DRE.]

It is an honor to have the opportunity to continue discussing The Public’s Law here on the Legal History Blog. The author-meets-readers panel that Dan Ernst, Anne Kornhauser, Noah Rosenblum, and I participated in at the American Society for Legal History Conference was a great occasion to discuss the book with scholars whose work and insights shaped the argument. Here I’d like to continue that conversation, focusing on a few key issues: the motivation for the book, the role of Hegelian ideas in American Progressivism, and the promise of studying legal history from a normative perspective.

Ernst’s contribution provides a very thorough and lucid summary of the argument as a whole. But I thought it might be useful for me to explain why I wrote the book and how it connects to some recent work in legal history. The study of the American “administrative state” has seen a renaissance of superb scholarship, including, to list only some highlights: Karen Tani’s work on welfare, Sophia Lee’s on civil rights, Jeremy Kessler’s on civil liberties, Joanna Grisinger’s on the congressional politics of administrative procedure, Dan Ernst’s on judicial review and administrative due process, and Anne Kornhauser’s on the New Deal and liberal democratic theory. But at the same time as we’ve developed an increasingly rich and multifaceted understanding of the role of the state and bureaucracy in American law and life, we’re also in the midst of a triumphant moment of legal conservatism that sees the administrative state as an anathema to constitutional values. Scholars like Philip Hamburger have provided intellectual backing for a project to uproot, or at least significantly curtail, the powers of federal government agencies. They have renewed Friedrich Hayek’s mid-century effort to tie the American welfare state to dangerous, Germanic, perhaps communistic forms of government.

Part of what fascinates legal historians and infuriates conservative critics about the modern American state is that it has empowered unelected civil servants (“bureaucrats!”) to make significant policy decisions and to interpret statutory and even constitutional law. Those practices seem dissonant with basic intuitions and sociological premises about what bureaucracy is-a hierarchical organization of tenured offices that is efficient and calculating at best, alien and dominating at worst. With this frame in mind, it is surprising or even frightening that federal officials would go about making normative judgments about what rights citizenship entails, or what race and sex discrimination mean, or how fundamental economic and social relationships ought to be structured.

The book is an effort to explain (and, in some cases, justify) that practice by looking to some of the intellectual origins of the American administrative state. I show how Progressive thinkers like John Dewey, Mary Follett, W.E.B. Du Bois, Frank Goodnow, and Woodrow Wilson developed an ethical conception of the bureaucratic state, in which civil servants would reason through and address serious moral and social conflicts. This conception of the state was rooted in the German philosopher G.W.F. Hegel’s philosophy of law, which some of them had read, and others were exposed to through intellectual intermediaries. So I acknowledge that there’s some truth in the conservative charge that aspects of Progressive thought and practice were inspired by German statist models. But there was also an important transatlantic shift: Whereas Hegel had rejected democracy as a constitutional norm, the Progressives placed popular sovereignty at the very center of their value system. They argued that the state had to further democracy not only by implementing legislative policy choices but also by incorporating the public into administrative decision-making. I show how that ideal was put to work in the agricultural New Deal and continued to echo in the implementation of the War on Poverty and the Civil Rights Act of 1964.

As Kornhauser noted in her comments at the panel, the book thus recovers a different way of thinking about “the state” as something more than “government.” For Hegel and the Progressives, the state referred to the relationship between government and society, rather than government alone. It captured an ongoing dynamic in which an organized, democratic “public” would interact with government “agencies” to reform and reconstitute social life. This vision of the state encompassed law and politics, institutions and ideologies, constitutional structure and social organization. Administrative agencies were at the center of the state because they were the most continuous contact point between the government and the society it regulated. The title, The Public’s Law, captures this mutually constitutive relationship between administrative law, on the one hand, and the public sphere, on the other.

The book aims to offer a useful corrective to received conceptions of Progressivism, according to which administrative institutions were prized for their efficiency, technical know-how, and insulation from all things “political.” I don’t deny that aspect of Progressive thought, but rather identify a different strand that treated administration as deliberative, collaborative, and critical, self-consciously oriented towards collective freedom. When we look back at agencies like the Farm Security Administration, or land use planning under the auspices of the Agricultural Adjustment Administration, we see civil servants actively trying to institute democratic forms of life through programmatic interventions. The Civil Rights Era likewise saw agencies like the Equal Employment Opportunity Commission making critical judgments about the meaning of statutory law, and the Office of Economic Opportunity implementing the War on Poverty through unprecedented levels of public engagement.

I make the provocative claim that these episodes of American political development can be understood in terms of Hegel’s political thought and its American reception. Rosenblum raises several useful questions and critiques about this argument. First, there is the issue of whether the Hegel I present is so thin and emptied of idealist substance that there’s nothing particularly “Hegelian” left. So I want to explain what’s distinctive about Hegelian political theory for the purposes of this argument. The first, as Rosenblum notes, is the interpersonal and social constitution of freedom. Hegel argues, most famously in the “master-slave” dialectic, that people can only be free if they recognize and are recognized by others as free. That crucial insight underlies Hegel’s philosophy of law and his concept of the state. The state expresses, embodies, and institutes a lived condition in which such interpersonal recognition is possible. Formal legal equality, economic regulation, welfare provision, the organization of society into trade associations, and the constitutional structure of government together ensure that individuals have the material and social requisites they need to be free. The administrative apparatus of the state plays a crucial role in providing these requisites. Civil servants not only exercise technical skill but also make ethical judgments about how to resolve conflicts between social groups under the auspices of law. Hegel, in characteristically grandiose fashion, says that such a state is the “actuality of concrete freedom.” What he means is simply that true freedom isn’t about being left alone. It’s about living with others in a political structure that enables each to have true agency.

Now, I think that political vision is quite robust and multifaceted. But it is shorn of the metaphysical baggage that some Hegelians think is essential to understanding his political thought. In my view, Hegel’s metaphysics (while fascinating in its own right and worthy of study) isn’t necessary to his legal and political thought. That view was shared by Progressives like John Dewey and Mary Follett, who translated Hegelian ideas into a pragmatist, social-scientific framework. But the American Progressive reception of Hegel did not merely take out his metaphysical plumbing. Rather, it thoroughly democratized his view, with each of the thinkers I examine emphasizing different democratic facets of bureaucracy. In Hegel’s mature thought, freedom is mostly passive and habitual-an affirmative acceptance of social and political structures in which one feels “at home.” The Progressives accepted Hegel’s view that freedom required interpersonal recognition, fostered and protected by administrative provision and reform. But they sought to make that reform process democratic, either in its ends, or in its means, or both.

The other important question Rosenblum as well Kornhauser raised is whether I underplay the connection between Hegel’s “volkish” tendency to connect the state with “the spirit of the people it embodies” and American racism and race theory. It’s true that Hegel famously embraced a philosophy of history in which the “world spirit” is held like a torch by one people or another, beginning in China and culminating, in Hegel’s time, in Germany. He also leaves Africa outside of world history altogether. This sweeping, hierarchical, and exclusionary historical vision likely made Hegel particularly appealing to figures like Woodrow Wilson and John Burgess, who adopted racialized (and racist) conceptions of the state. But it is worth underscoring that, despite Hegel’s eurocentrism and orientalism, his state theory in no way rested on ideologies of race or racism. He was a nationalist of a sort, but he did not understand human groupings or political values in terms of racial “types” or hierarchies. Nonetheless, I could and should have done more to acknowledge the troubling affinities between Hegel’s philosophy of history and racial theories of politics and social science.

There is an interesting, subversive application of this aspect of Hegel in Du Bois, which the book does not pause to unpack. In his famous, partly Hegelian passage on “double consciousness,” Du Bois describes having “two souls, two thoughts, two unreconciled strivings, two warring ideals in one dark body, whose dogged strength alone keeps it from going asunder.” He invites us to think about how racism creates excruciating internal conflicts within individuals and within communities, rather than making anyone feel “whole” or “unified.” The book shows how the state can either be an instrument of such racial domination-as with Wilson’s segregation of the federal civil service-or how it can partner with social movements to achieve greater equality-as with the federal government’s efforts to address employment discrimination, school segregation, and racialized poverty in the 1960s and 70s.

As both Kornhauser and Rosenblum recognized, The Public’s Law ultimately wants to embrace and recover the most attractive aspects of the Progressive Hegelian tradition, to render them in their best light while acknowledging their internal tensions, so that they are of use to legal and political thought in the present. That normative focus can make the argument seem somewhat peculiar to historians. I’m selective about the examples I give, identifying models of democratic administration that tease out various aspects of a coherent progressive theory. At the same time, the historical and institutional material makes the argument seem strange to political theorists, as I rely on detailed historical examples to show the promise of and frictions within that theory. I try to bring history and theory into deeper dialogue, so that our understanding and application of political ideals is informed by related social dynamics and institutional configurations. While the argument is committed to the notion that “ideas matter” and can influence legal and political change, I don’t see this process as one sided. The Public’s Law rather shows a continuous dialogue between ideas and institutions in both German and American public law. We can identify particular examples where ideas really seem to shape practice-as when, for example, a Farm Security Administration staff manual quoted John Dewey on the social constitution of individuality. But rather than chasing the causal arrow back and forth, perhaps we ought to accept that we generally can’t understand political structures, legal rules, or social movements without understanding their ideal commitments. Nor can we understand these commitments without grasping the concrete relationships and lived experiences in which they are embedded. That is the most fundamental Hegelian legacy I wish to preserve.