In writing my book Fluid Jurisdictions: Arabs and Colonial Law in Southeast Asia (Ithaca: Cornell University Press, 2020), I approach legal history as a series of ‘portals.’ Each legal system and each legal device opened up a world of possibilities. The more a legal system is used, the deeper the sovereign ruler’s jurisdictions and vice versa. Likewise, each legal device such as a power of attorney echoes other similar or commensurable devices such as a wakala across legal systems and cultures further extending its utility across different jurisdictions. A series of portals connected the western end of the Indian Ocean to the eastern end allowing users to jump across huge spaces to enact various actions ranging from transferring economic power to granting a divorce. By generating links tied to institutional legal bureaucracies between otherwise disjointed points, they broadened the orbits of economic production and family responsibility. The use of colonial legal portals in particular came at high cost for most people because colonial legal systems tend to hold people captive. Before going through a portal, one had options, but once one passed through a door to colonial jurisdictions, it was hard to leave for myriad reasons.

I marvel at how little was opaque when it came to law in the eyes of my historical actors - the diasporic Arabs who originated from Hadhramaut in Yemen who seemed to adeptly navigate English common law, Dutch civil law and colonial reformulations of Islamic law in Southeast Asia. They created a scattered accumulation of legal documentation which we inherit today that reveal new-fangled colonial legal systems at every turn that because laws differed from island to island even as they came under a single jurisdiction at times in the vast archipelago in Southeast Asia. Colonial subjects legal practitioners were creating and discovering their own legal systems in ‘real time.’ Just like how I dwell on laws, legal classifications, legal documents, these people in the past also took time to dwell on the same things in multiple languages and idioms with higher stakes of course. To dwell is the first step towards a commitment, a willingness to engage with something strange.

Although I eventually turned to legal history as the main framework for my book, my original question focuses on the spaces in Southeast Asia to illuminate what truly happened in specific locations with particular jurisdictions. My starting question a decade ago was “why did Southeast Asian port-cities whose histories are often exalted for being mixed remain ethnically and socio-economically so divisive?” For example, Muslim subjects (later citizens) were divided ethnically even when classified as one community by colonial and national bureaucracies. It is tempting perhaps to merely blame European colonialism for deepening societal rifts in many ways but this is inadequate. I became intent on discovering the exact contours of the relationship amongst colonial subjects within the new colonial environments in the nineteenth century. As I dug further in the archives, I found that the diasporic peoples I was tracing were rooting themselves in Southeast Asia, intertwining their roots with that of colonial jurisdictions which deepened over time with the added weight of subjects’ expectations. Territorial jurisdictions within maritime Southeast Asia became paramount in the stories I tell although personal jurisdictions tied to older forms of sovereignty still traveled within individuals who continued to make unexpected connections across vast geographical expanses under oppressive rule.

To open a door, to dwell, to take root – that is the history of law in the colonies. 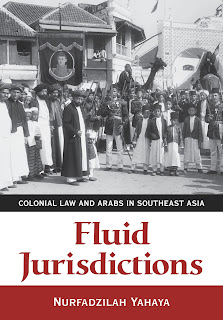 In the photograph on the cover of my book is a life-sized camel with a jubilant expression made out of wood, cloth and possibly metal on wheels accompanying a procession of Arabs in Surabaya located in Java who were commemorating the inauguration of Dutch Queen Wilhelmina in 1898 whose portrait is on the left. The Arabs in the foreground had their swords drawn as was customary at parades, weddings and special occasions. Amongst them, I spotted one of my main historical actors, the Kapitan Arab (head of the Arabs) of the Surabaya Arab community from the Bobsaid clan, a name I have encountered only in Surabaya. Sech Hasan bin Abdulla Bobsaid stood apart from his community slightly in front of them with his face to the camera. Clearly, he was the one who led the Arab delegation at this parade, flanked by members of his community, and the ecstatic camel and more subdued elephant replicas. The camel embodies this new creature in town – colonial legal forms which were mobile, tractable, reimagined versions of older laws moving forward into the twentieth century. My blog posts this month will focus on other aspects of this phenomenon.

Posted by Nurfadzilah Yahaya at 7:51 AM