Tuori on Europe and scholars in exile

Kaius Tuori (University of Helsinki) has published Empire of Law: Nazi Germany, Exile Scholars and the Battle for the Future of Europe with Cambridge University Press. From the publisher: 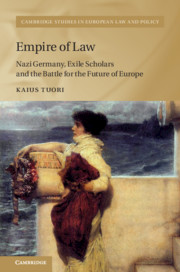 European legal integration is often justified with reference to the inherent unity of European legal traditions that extend to ancient Rome. This book explores the invention of this tradition, tracing it to a group of legal scholars divided by the onslaught of Nazi terror and totalitarianism in Europe. As exiles in Britain and the US, its formulators worked to build bridges between the Continental and the Atlantic legal traditions, incorporating ideas such as rule of law, liberty and equality to the European heritage. Others joined the Nazi revolution, which promoted its own idea of European unity. At the end of World War Two, natural law and human rights were incorporated into the European project. The resulting narrative of Europe, one that outlined human rights, rule of law and equality, became consequently a unifying factor during the Cold War as the self-definition against the challenge of communism.

"Kaius Tuori convincingly demonstrates how a narrative from Roman law to European identity was constructed in the twentieth century, and the ideological purposes the fiction was made to serve, including across the divide between National Socialist Europe and a self-styled continent of human rights. There is much to learn from Tuori's erudition and insight." - Samuel Moyn

"Tuori is to be commended for producing a rich and textured work filled with important insights. This book will undoubtedly reframe the debate about the ideologies supporting the narratives of European legal history to a significant extent." - Paul J. du Plessis

"A deeply learned investigation of a somber history, Kaius Tuori's Empire of Law tracks the fate of the study of Roman law through the Nazi years and into the post-War effort to rebuild Europe. Indispensable reading for understanding the Roman legal tradition in Western history." - James Whitman