Thompson on crime, violence, and phrenology 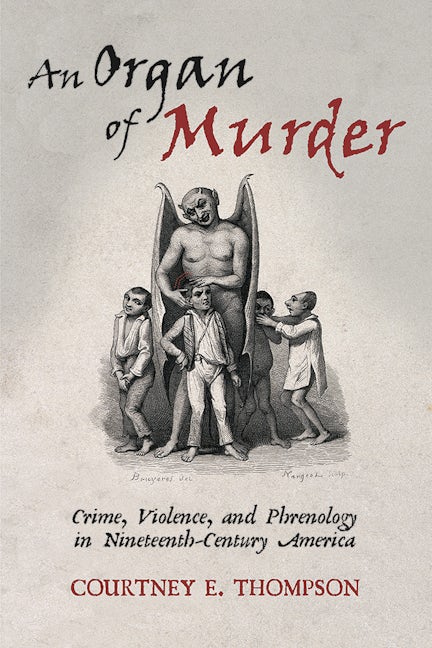 Courtney E. Thompson (Mississippi State University) has published An Organ of Murder: Crime, Violence, and Phrenology in Nineteenth-Century America with Rutgers University Press. From the publisher:

An Organ of Murder explores the origins of both popular and elite theories of criminality in the nineteenth-century United States, focusing in particular on the influence of phrenology. In the United States, phrenology shaped the production of medico-legal knowledge around crime, the treatment of the criminal within prisons and in public discourse, and sociocultural expectations about the causes of crime. The criminal was phrenology’s ideal research and demonstration subject, and the courtroom and the prison were essential spaces for the staging of scientific expertise. In particular, phrenology constructed ways of looking as well as a language for identifying, understanding, and analyzing criminals and their actions. This work traces the long-lasting influence of phrenological visual culture and language in American culture, law, and medicine, as well as the practical uses of phrenology in courts, prisons, and daily life.

"Courtney Thompson provocatively measures the face, head, and soul of American phrenology and invites us to a discovery of the historical origins of scientific criminology." - Stephen Casper

"In this compelling book, Courtney Thompson takes readers to the prisons, courtrooms, and streets of antebellum cities to expose just how phrenology claimed authority on criminality. Rich in detail and analysis, An Organ of Murder vividly illustrates the long history of making criminal minds and bodies into objects of medical and scientific inquiry." - Carla Bittel