von Bernstorff, Dann, and others on international law and decolonization 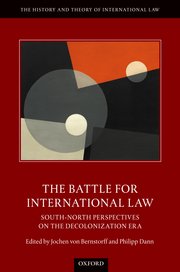 Jochen von Bernstorff (Tubingen Law) and Philipp Dann (Humboldt University Berlin) have co-edited The Battle for International Law: South-North Perspectives on the Decolonization Era, which came out with Cambridge University Press in 2019. From the press:

Contributions from a global set of authors cover contemporary debates on concepts central to the time, such as self-determination, sources and concessions, non-intervention, wars of national liberation, multinational corporations, and the law of the sea. They also discuss influential institutions, such as the United Nations, International Court of Justice, and World Bank. The volume also incorporates contemporary regional approaches to international law in the 'decolonization era' and portraits of important scholars from the Global South.

The Battle for International Law: A Sketch, Jochen von Bernstorff and Philipp Dann

Part I: Sites of Battle

1. The Common Heritage of Mankind: Annotations on a Battle, Surabhi Ranganathan

2. The Battle for the Recognition of Wars of National Liberation, Jochen von Bernstorff

3. The Developmental State: Independence, Dependency and the History of the South, Luis Eslava

5. Acquired Rights and State Succession - The Rise and Fall of the Third World in the International Law Commission, Anna Brunner

6. Rival Worlds and the Place of the Corporation in International law, Subhya Pahuja and Anna Saunders

10. The International Court of Justice During the Battle for International Law (1955-1975)-Colonial Imprints and Possibilities for Change, Ingo Venzke

11. The Battle and the United Nations, Guy Sinclair

12. The World Bank in the Battles of the 'Decolonization Era', Philipp Dann

13. Reading R.P. Anand in the Postcolony: Between Resistance and Appropriation, Prabhakar Singh

18. The Soviets and the Right to Self-Determination of the Colonized: Contradictions of Soviet Diplomacy and Foreign Policy in the Era of Decolonization, Bill Bowring

19. The Failed Battle for Self-Determination: The United States and the Postwar Illusion of Enlightened Colonialism, 1945-1975, Olivier Barsalou

What's Law Got to Do with it? Recollections, Impressions, Martti Koskenniemi