IntLawGrrls remembers Thurgood Marshall, who was confirmed by the Senate as an Associate Justice of the U.S. Supreme Court 40 years ago today. 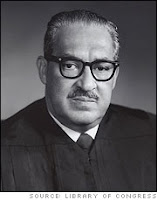 A new book (forthcoming next year) tells the story this way:

It would be [Marshall's] fate to be nominated in 1967, a year Robert L. Allen would call "an important turning point in the history of black America. It was a year of unprecidentally massive and widespread urban revolts. It was the year that so-called riots became an institutionalized form of black protest."

Marshall’s opponents were concerned that he would change the Court balance on a particular case: Walker v. City of Birmingham. The case involved peaceful civil rights marchers in Birmingham, Alabama, led by ministers Martin Luther King, Jr., Ralph Abernathy, and Fred Shuttlesworth. The City had obtained a p 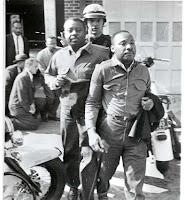 reliminary injunction against the marchers, but the protesters, claiming that the injunction and underlying city ordinance, were unconstitutional, violated the injunction, and marched. The Alabama trial court found them in contempt for violating the injunction, and sentenced them to jail terms. The protesters challenged the ruling, but the U.S. Supreme Court held that they were bound to follow the court order and challenge it through the judicial process, rather than violate it and question its constitutionality afterward....

Justice Brennan [argued in dissent]: "We cannot permit fears of ‘riots’ and ‘civil disobedience’ generated by slogans like ‘Black Power’ to divert our attention from what is here at stake."... The case was not about "violence or the right of the State to control its streets and sidewalks," but instead about whether Alabama could insulate from judicial review "ex parte orders and legislation upon which they are based even when patently impermissible prior restraints on the exercise of First Amendment rights, thus arming the state courts with the power to punish as a ‘contempt’ what they otherwise could not punish at all."...

Walker was a 5-4 decision, handed down June 12, 1967. Retiring Justice Tom Clark was in the majority. A new justice with different views could change the outcome. President Johnson nominated Marshall the next day.

It was Senator Strom Thurmond of South Carolina who first drew the attention of his colleagues to the Walker case. On June 15, 1967, he introduced in the Senate record an editorial from the Washington Evening Star entitled "Dr. King’s Conviction." The paper thought the Walker ruling was sound, and hoped it would last as controlling precedent.

But this would be a very dubious assumption in view of the President’s nomination of Thurgood Marshall to replace Justice Clark. When a suitable case comes along after the Solicitor General takes his seat on the court, there is a high probability that the holding in the case of Dr. King will be overruled by a new 5 to 4 decision....

The man who had called for an end to "anarchy" was now criticized as a source of it....[But] most Senators saw it differently. Wayne Morse of Oregon thought Marshall’s nomination was "a shining moment for American democracy." It was evidence of the nation’s progress, reflecting "our growing maturity as a people and a nation." Thomas Kuchel, Republican of California, argued that Marshall’s nomination "reflects the American tradition in its finest sense." While many stressed that Marshall’s appointment was due to his experience, not his race, Kuchel thought that "the world and the American people will not ignore completely the fact that as a member of an ethnic minority, he will now sit on our supreme tribunal." It was this fact that led Marshall’s nomination to exemplify the American dream of "equal justice and opportunity under law." By confirming Marshall, the Senate would "express confidence in the American dream, a dream which says that every man, regardless of race, color, or creed, may achieve the goals he seeks in a free society."

Thurgood Marshall’s nomination to the United States Supreme Court was confirmed by the Senate, 69 to 11, on August 30, 1967. Compared with Marshall’s very difficult, drawn-out confirmation to the Second Circuit in 1961-62, this was comfortable. Still, Marshall said of LBJ: "I don’t see how he got it through, but he did." "This is a shining hour," Senator Michael Mansfield said in announcing the news to President Johnson. "We have come a long, long way toward equal access to the Constitution’s promise." The nation would go "further along that way" with Marshall on the Court. For Marshall himself, a wide chasm remained between the ideal of constitutional equality and conditions of life for African Americans. He certainly hoped that the Court would provide new opportunities to move the nation forward. For many Americans, however, Marshall’s Court appointment was instead a sign that the American dream had already come true. From Mary L. Dudziak, Chapter 5, Exporting American Dreams: Thurgood Marshall's African Journey (forthcoming Oxford University Press).
Posted by Mary L. Dudziak at 10:58 AM