Was the Industrial Revolution caused by Evolution?

Were we naturally selected to be capitalists? "Gregory Clark, an economic historian at the University of California, Davis, believes that the Industrial Revolution — the surge in economic growth that occurred first in England around 1800 — occurred because of a change in the nature of the human population," Nicholas Wade writes in today's New York Times. Hat tip. 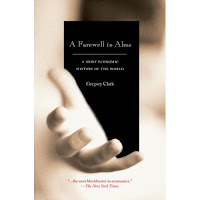 w behaviors required to make a modern economy work. The middle-class values of nonviolence, literacy, long working hours and a willingness to save emerged only recently in human history, Dr. Clark argues. Because they grew more common in the centuries before 1800, whether by cultural transmission or evolutionary adaptation, the English population at last became productive enough to escape from poverty, followed quickly by other countries with the same long agrarian past.

Dr. Clark’s ideas have been circulating in articles and manuscripts for several years and are to be published as a book next month, “A Farewell to Alms” (Princeton University Press). Economic historians have high praise for his thesis, though many disagree with parts of it.

“This is a great book and deserves attention,” said Philip Hoffman, a historian at the California Institute of Technology. He described it as “delightfully provocative” and a “real challenge” to the prevailing school of thought that it is institutions that shape economic history....

The basis of Dr. Clark’s work is his recovery of data from which he can reconstruct many features of the English economy from 1200 to 1800. From this data, he shows, far more clearly than has been possible before, that the economy was locked in a Malthusian trap _ — each time new technology increased the efficiency of production a little, the population grew, the extra mouths ate up the surplus, and average income fell back to its former level.

Clark wondered whether the escape of the Malthusian trap had come about through natural selection. His data caused him to reject the idea that evolution toward disease resistance provided the answer. Instead, an analysis of English wills showed that:

Generation after generation, the rich had more surviving children than the poor.... That meant there must have been constant downward social mobility as the poor failed to reproduce themselves and the progeny of the rich took over their occupations. “The modern population of the English is largely descended from the economic upper classes of the Middle Ages,” he concluded.

As the progeny of the rich pervaded all levels of society, Dr. Clark considered, the behaviors that made for wealth could have spread with them. He has documented that several aspects of what might now be called middle-class values changed significantly from the days of hunter gatherer societies to 1800. Work hours increased, literacy and numeracy rose, and the level of interpersonal violence dropped.

Hmmm. Continue reading this interesting Science Times article here (or page D1 of your NYT). We can easily imagine holes in the newspaper article version of this argument, but of course we haven't seen the book, which promises to be important and provocative, whether wrong or right. Keep an eye out for reviews, in this space and your favorite papers, appearing with the book next month.
Posted by Mary L. Dudziak at 6:54 AM