Sherry Colb recommends Elyn Saks' new book, The Center Cannot Hold: My Journey Through Madness in a must-read post on Dorf on Law. The book is reviewed today in the San Francisco Chronicle. This is not really a history book. It is a personal memoir of 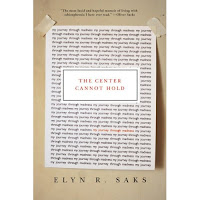 a law professor's life with mental illness. But the SF Chronicle reviewer also notes that memoirs like Saks' have been made possible by historical developments: "this kind of vivid personal recollection exists in part because of our current breakthroughs in treatment and their relative novelty." We might see this book in two ways: a story of one of our colleagues, and also a memoir of one scholar's passing from one era of mental health treatment into another.

Clea Simon, in the SF Chronicle, writes in part:

Elyn R. Saks has been to hell and back. In this articulate and at times profoundly disturbing memoir, Saks, a professor at the University of Southern California Gould School of Law and adjunct professor of psychiatry at UC San Diego, recounts her nearly lifelong struggle with schizophrenia, including voices, visions and profound depersonalization.

For Saks, as perhaps for most schizophrenics, the disease started subtly. As a child of 7 or 8, she believed she was "dissolving ... like a sand castle with all the sand sliding away." Soon she feared unnamed strangers, and by puberty she stopped eating in an effort to gain control over her life....

But it wasn't until she went to Oxford University as a Marshall scholar that she truly began to lose her grip....Thanks to an incredible strength of will and a powerful intellect, Saks was able to keep herself more or less together, even as the voices and visions worsened. She spent time in hospitals and with a sympathetic psychoanalyst, and managed to graduate and apply to law school. Once at Yale Law School, however, her disease took control, and Saks describes Goya-esque scenes in which hospital restraints left her helpless against flying demons, and forced medications did little to stop the voices telling her she was not worthy to live.

Because of her current clarity, Saks' descriptions are chilling, and when she occasionally steps back, her explanations can be profound. "Psychotic people who are paranoid do scary things because they are scared," she writes, likening the experience to "that sweaty midnight moment when you sit bolt upright in your bed from a nightmare that you don't yet know isn't real." This is not easy reading.

Sherry Colb suggests that the lesson from the book "is that people with schizophrenia are not so different from everyone else and that what distinguishes them should make the rest of us feel lucky and empathic rather than superior and distant."

But then she goes on to talk about Elyn Saks, my USC colleague, in a way that makes clear that Elyn is not so much just like everyone else. Instead she has qualities we should aspire to:

h mental illness has become increasingly common in the population..., the stigma attached to it has not abated very much over the years. And this is even truer of thought disorders such as schizophrenia than of the so-called mood disorders such as depression and manic-depression. For a person of status like Elyn to write a memoir of schizophrenia is accordingly to take a risk -- people can either look at others with schizophrenia in a new and more enlightened way or they can look at the writer of the book in a less flattering light and say "now we now that she is one of 'them.'" I am hopeful that most readers will do the former, but Elyn's willingness to risk the latter in her effort to educate us all says a great deal about her character.

Elyn Saks is Associate Dean and Orrin B. Evans Professor of Law, Psychology, and Psychiatry and the Behavioral Sciences at USC. Her bio and bibliography are here. A recent interview on NPR's Fresh Air is here. Buy the book at your local independent bookstore, or here.
Photo credit: Elyn Saks.
Posted by Mary L. Dudziak at 10:08 AM