SEIZING DESTINY: How America Grew from Sea to Shining Sea, by Richard Kluger, is reviewed this week in the Washington Post and the New York Sun. Patrick Griffin's review for the Sun is more satisfying, setting the book in its needed context: the Turner thesis. Griffin writes, in part:
When did America's mythic push West get under way? When did we become an im 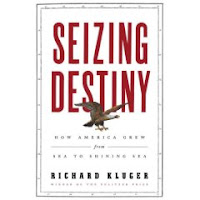 perial nation?...
Equally challenging is the question of why expansion happened. We have all sorts of explanations for this question. At one extreme, some argue, as did the historian Frederick Jackson Turner more than a century ago, that the nature of the frontier spurred expansion. Pushing forward a line separating savagery and civility created a democratic ethos and the compulsion to spread civility further. At the other end of the spectrum, others argue that some essential European trait such as restlessness, the desire to be free, greed, or racism -- what historians once characterized as a European "germ" that could overpower the American environment -- explains why Americans would look to the West....
Richard Kluger, a Pulitzer Prize winner and author of a marvelous book on the history of Brown v. Board of Education, now enters the fray with "Seizing Destiny: How America Grew from Sea to Shining Sea" (Knopf, 672 pages, $35). This is a massive tome, offering a reading, or better a litany, of the events, pressures, and dynamics that led Americans to seize a continent, and even to dream of super-continental conquest. Mr. Kluger boils down a complex set of processes to this: Europeans, particularly Englishmen and women, freed by the Reformation and the Enlightenment from feudal strictures to think of themselves as individuals became storm troopers for British imperial, and later American national territorial expansion.

For Mr. Kluger, this impulse of personal independence impelled westward movement, and great proponents of expansion, such as Benjamin Franklin and Jefferson, amplified the inevitable. The availability of land, and the willingness to ignore Indian claims to it, allowed this sensibility to flourish. From the earliest Elizabethan sea dogs like Walter Raleigh, and the poor men that sailed with them, to the troops sent down to topple Manuel Noriega, and all points in between, Americans felt justified in becoming lords of all they surveyed....
Expansion for Mr. Kluger has an irresistible quality....America's common conquistadores and grand visionaries such as Jefferson, Franklin, and Theodore Roosevelt conquered and settled a continent because of the seeming limitlessness of land and their belief that they had a divine mandate to do so.

In some ways, Mr. Kluger's answers to the critical questions of expansion appear much like Frederick Jackson Turner's. The frontier created Americans. On the other hand, he embraces the merits of the germ thesis as well. The ready temptation of land allowed these New World people to become what the Old World had prepared them to be: grasping conquerors. This sense of inevitability does not make for a novel or sophisticated interpretation, and the book does not pause over contingencies. But in fairness, Mr. Kluger does not take a triumphalist tone while covering an impressive amount of historical ground. While we don't find new answers to critical questions in "Seizing Destiny," the questions themselves are the right ones to ask.
The full review is here.
Posted by Mary L. Dudziak at 11:47 AM