Reviewed: Watson, Sacco and Vanzetti: The Men, the Murders, and the Judgment of Mankind

"If it had not been for those things, I might have lived out my life talking at street corners to scorning men. I might have died unknown, unmarked, a failure. This is our career and our triumph. Never in our full life can we hope to do such work for tolerance, for justice, for man's understanding of man as now we do by an accident." 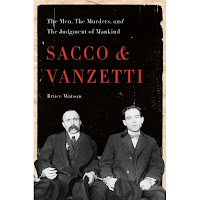 In this unattributed quote in John Dos Passos' The Big Money, are the most famous words Bartolomeo Vanzetti ever uttered, writes Art Winslow in his review of Bruce Watson's Sacco and Vanzetti: The Men, the Murders, and the Judgment of Mankind in the Los Angeles Times. Winslow writes:

Vanzetti spoke some close approximation of that to sum up seven years of travail, scant weeks before he and Sacco died in the electric chair in the first hour of Aug. 23, 1927, maintaining their innocence to the end. (The reporter who conducted the interview for New York World admitted the possibility of some embellishment.) By that time, the fate of the two Italian immigrants was an international cause célèbre, one that had waxed and waned along with a series of appeals and setbacks since their conviction in 1921 of having killed a paymaster and a guard in a payroll heist the year before in South Braintree.

Even at this historical remove, the two men, Watson writes, "haunt American history," in part because "there is little concrete proof in the case . . . only shifting stories and gut feelings."... There are...legalistic readings, such as that offered in 1927 by then Harvard law professor Felix Frankfurter, who termed Judge Webster Thayer's decision in denying appeals for a new trial "a farrago of misquotations, misrepresentations, suppressions, and mutilations."...Thayer himself was quoted variously as saying -- well away from his courtroom in Dedham -- that Sacco and Vanzetti were "Bolsheviki" and that he "would get them good and proper."...H.L. Mencken called the case "one of the most amazing scandals in the whole history of American jurisprudence."
Watson's integration of the case with its cultural context and his attention to Sacco's and Vanzetti's close connections to truly dangerous anarchist dynamiters are the main strengths of his account....Watson's agnosticism on the question of their guilt or innocence lets him present a cogent overview that avoids the tendentiousness some of his predecessors fall prey to.

The full review is here.
Update: Robert K. Landers weighs in less positively at the Wall Street Journal, concluding that "It's apparent that, as a historian, Mr. Watson is no Sherlock Holmes." The evidence is not as equivocal as Watson suggests, and supports the conclusion that Sacco was guilty, and Vanzetti innocent, he argues.
Posted by Mary L. Dudziak at 10:30 AM