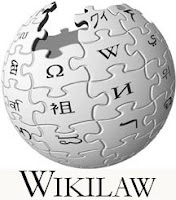 Do we live in a world governed by a rule of law? WikiLawyers think that we should. And so, inspired by the creators of Wikipedia, a new on-line community has been formed to craft legal norms. Just as Wikipedia brought us information 2.0, in which, as Steven Colbert put it, "reality is just what the majority agrees upon," WikiLaw aspires to bring interactivity to the rule of law. Sounds like democracy to me.
Our lawmakers in Washington are often distracted by matters that seem so far from our daily lives. For example, does the FISA court’s jurisdiction really matter when the president will simply by-pass it anyway? WikiLawyers tend to focus on matters closer to our ev

eryday experience. For example, one entry recommends a sentence of 10 years at hard labor for throwing gum on the sidewalk. Don’t you hate that?

Just as disputes sometimes spring up at Wikipedia, with different authors rewriting entries based on different views of, well, reality, the same thing has been happening at WikiLaw. For example, someone created a WikiLaw entry on the crime of double-parking, with rather harsh penalties. Objections came from folks who just needed a minute to run in for that latte. After much back-and-forth, the ban on double-parking was modified to include a "Starbucks exception."

dimension of WikiLaw is legal history 2.0. Authors of legal history-related pages have taken seriously Jack Balkin’s collection What Brown v. Board of Education Should Have Said, and have rewritten the Brown decision itself. At first the WikiLaw version of the decision was re-written to uphold separate but equal. But then someone realized that the Supreme Court had also rewritten Brown in its ruling last year, Parents Involved in Community Schools v. Seattle, and so Chief Justice John Roberts’ views on the history of Brown, once simply a revisionist take in a new opinion, have now become part of the WikiLaw reconstruction of what Brown actually said. It used to be that in order to rewrite the past, you had to be either a revisionist historian or a Supreme Court Justice, but at WikiLaw, you can do it, too.

If Wikipedia is, to quote Colbert again, "the Encyclopedia where you can be an expert even if you don't know what the hell you're talking about," I suppose with WikiLaw you can create a rule of law even if you don’t give a damn about justice. So what’s new about that?
Posted by Mary L. Dudziak at 12:01 AM