that 'law and order shall prevail,' ' Anthony Read tells us at one point in 'The World on Fire: 1919 and the Battle with Bolshevism,' his whirlwind global survey of 1919 and the historical conflagrations playing out in the United States, Europe and the Soviet Union at the time." Steve Kettmann reviews the book in today's San Francisco Chronicle. Kettman suggests that "what emerges from looking back at the Great Red Scare of 1919 is a shocking testimonial to how craven people can be, how thuggish and quick to discard the Constitution, if they are afraid - and, in particular, if a runaway media mob chooses to fan the flames of fear and anger and twist information to serve their purposes."

BLUE & GOLD AND BLACK: RACIAL INTEGRATION OF THE U.S. NAVAL 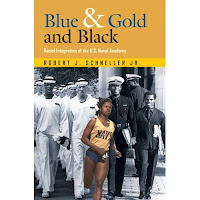 ACADEMY by Robert J. Schneller Jr. (Texas A&M) is reviewed for the Washington Times by Paul Dickson. This book "traces the transformation of an institution that goes from an ugly Jim Crow environment ruled by a bigoted minority of midshipmen to one which strives to empower minorities. This transformation was not without social cost and black midshipmen bore the brunt of it, first only males and then the black women who were described as "double insults" because of race and gender." For Dickson, "the power of this book is that it allows us to follow these men and women in their own words." The author "meshes this approach with information from the official records to produce a hybrid which perfectly suits this subject. As he explains in the introduction, most institutional history is written from the top down, while most social history is written from the bottom up. This book does it from both perspectives. The result is vivid history which blends the style of Studs Turkel with the rigor of the best academic writing."
David L. Chappell is less enthusiastic about April 4, 1968: Martin Luther King, Jr.'s Death and How It Changed America by Michael Eric Dyson (Basic), in a Chicago Tribune review.
'The Word of the Lord Is Upon Me: The Righteous Performance of Mart 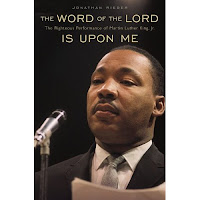 in Luther King, Jr.' by Jonathan Rieder is discussed by David Garrow in the Los Angeles Times. This book, Garrow finds, is "rich, thoughtful" and "extremely learned." It is

"not biography, history, or theology," Rieder emphasizes. Instead, the Barnard College sociologist focuses on "King's language and the way he deployed it," as distinct from King's public activism or the substance of his beliefs. The result is an extended meditation on the deeper meanings of the civil rights leader's words and how he used them, featuring a mosaic of carefully chosen and closely analyzed quotations....Uppermost in Rieder's treatment is his heartfelt desire to see King as a fundamentally universalist public voice rather than an essentially black voice.

Adam Fairclough weighs in on Reider's book in the Washington Post. He notes that King

embodied the tension between the moral universalism of the black church and its racially specific character. Leading a movement dedicated to the destruction of racial barriers, King extolled the ideal of integration in hauntingly beautiful language. Yet King's own organization was specifically designed to be a black organization, not an interracial one. The Southern Christian Leadership Conference rested upon a base of African American churches. It accepted help from whites but insisted that primary leadership rest firmly in black hands....

In pursuing his moral vision of a "beloved community," King did not reject his racial heritage or identity. Although he straddled the black and white worlds, the black one remained more personal and intimate....He extolled racial pride and empathized with "the bitterness of fellow blacks." Yet King's blackness, Rieder argues, was more style than substance, and it "never came close to a full-fledged 'black theology.' " Moreover, King never regarded black identity as fixed or sufficient.

The Post notes other new MLK-related books here.
Posted by Mary L. Dudziak at 9:32 AM